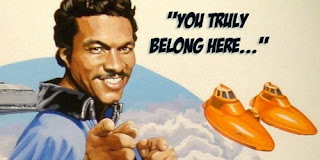 I'm sitting in bed working on inclusivity policies and harassment policies and community guidelines. In another document I have some ideas on how we can make Breakout even more welcoming to all gamers. As I flick from screen to screen, ensuring that all my ducks are in a row and that I'm not excluding anyone, I wonder what I should blog about. It's on my list for today and honestly, I haven't really thought much about it. I know I have topics patrons have asked me to do. And one of them was how to make an inclusive community.

At the time, I thought the question was answered by my guide to making conventions more women-friendly and inclusive. Partly, I'm not comfortable talking about how to make communities more welcoming to other minority groups because I'm not part of those minority groups. I'm a woman. I'm queer. That's all I got. Otherwise I'm as white as it comes and raised in the middle class and currently live in the lower-middle class.

All this is to say that I can't speak for anyone but myself. And as myself, I help organize the largest gaming community in Toronto and run Breakout Gaming Convention, as well as help in a few other spaces. As myself, I can tell you that we are constantly striving to do better and be more inclusive, and while I can't speak for minorities, I can tell you the steps we've taken. These steps are constantly being revised and revisited in an attempt to make our community better. And these steps are never going to be enough.

We're always learning. We aren't perfect. We fuck it up. We go back, figure out what we did wrong, and try again. We are constantly vigilant against letting other people fuck it up, and we do our very best to act with integrity and kindness and love. But that isn't what it takes to build an inclusive community. Those are just some bullet points to remember. I'm going to tell you how I do it, how I'm working on it, and how we at Breakout and Toronto Area Gamers are striving for better. Here's how we do it. This is by no means all we can be doing. We're always trying to do more. This is what we have so far.

Spy on other conventions who are doing it right. And by spy, I mean pay money and attend. Pay attention to how they foster inclusivity. Take notes when you're attending of what you thought was done well, where things fell down a little, and where you thought a little nudge would have helped more. Check out the demographics, see how comfortable people seem, and look at their harassment and inclusivity policy. If they don't have a harassment policy, that should be a red flag.

Ensure you have a harassment policy. Even if you think you don't need one, make one. Take the time, sit down and think about it, and then make one. The easiest way is to research harassment policies in other communities or for conventions and copy, paste, and edit to meet your needs. Make sure it protects people, doesn't get too specific, and allows you some freedom of movement to treat each situation as individual. Also, make sure you follow it. It's also a good idea to have membership guidelines and to have those policies and guidelines widely available. For us, we have them posted on each of our meetup events, and I ask that all our event hosts confirm they're familiar with them.

Call in when shit gets problematic. Sometimes people do some crappy things. They're sexist or racist or ableist or transphobic... something awful. A lot of times, these people don't know they're being gross or making people uncomfortable. Take the time to talk to them on their own and let them know how they're making other people feel and why the behaviour isn't okay. Most of the time people feel awful and will stop. One on one conversations, while a lot of emotional labour, are usually worth it for making a community feel heard and safe.

Take out the garbage when you need to. Gamers exist in a social sphere that has a reputation for accepting anyone. While this is great, in theory, it's been used to protect people. After a call in has happened for shitty or problematic behaviour, and nothing changes, it's time to welcome the banhammer to the conversation. Any sort of harassment needs to stopped immediately and dealt with. It sucks, but you have to mean it when you say you're inclusive, and that means booting the asshats.

Bring minorities into your community as community leaders. It's great to make a welcoming space. But having those people making their own spaces is even more badass. Make sure your organizer team, your core group of decision makers, is a group of people (not just one person) and is a diverse group of people. They will make the changes that need to happen because they know better than the rest of us what changes need to be seen. Do your best to make sure your team isn't just made up of a bunch of straight white men. And oh. Make sure it's a team.

Keep an eye on the needs of your community and try to meet them. When you plan events or meetings, look at how accessible the space is. Try to keep in mind that many gamers are hurting for income, so keeping events pay what you can or free is great. We make sure we ask for donations, and don't make paying us mandatory for our community events. We always try to make sure our events are at places that have a good reputation and are trans and queer friendly. We also make sure they're accessible and close to transit lines. Do what you can to support your community by being aware of their needs and listening when they tell you what they need.

Actively listen to people and learn to take criticism. As I mentioned way above, we're fallible. We have blind spots. We don't always do a good job. People may not call in with us, as community organizers, and it's our job to listen to them, to provide a space, and to take what they say to heart. It's easy to become defensive and dig your heels in, but no growth can happen when you do that. Take a breath, really listen, and note the points somewhere you can come back to after you've cooled down. Then digest them and prepare solutions for them. If they're criticizing your inclusivity movements, listen to them, and assure them of why you're doing this. Take time and explain yourself. It's easier to bring them with you than to fight against the current. So get them on board.

Hold space for people and be the good you want to see. People just want to be heard and feel safe. Even if you don't agree with their points, at least let the person speak and make them feel heard and validated. Make sure that you are accessible to people. Make sure that you communicate with them honestly and with integrity, but also in a way that makes them feel like they own part of the community and that you are listening to their needs. Give them the spotlight to talk to you. Make an effort to know them. Make an effort to always assume best intentions and be good to your community members. Be the love we need in our communities.

Self care. Don't fucking forget self care. I almost forgot this. As I was typing some of the closing paragraphs I was talking about how demanding this gig is on people. It's tough. It's not easy. Being clear in your communications about when you can and can't help people, taking breaks, relying on your team, and checking in with yourself (and your team and community) go a long way. Really remember to take care of yourself. It's easy to fall apart and when you do that, you let folks down. If you learn to communicate efficiently with your team, you'll all get better at saying you need help rather than burning out and suddenly forcing people to take on extra work without knowing it would happen.

Overall, being a good citizen and a good organizer are similar. It's work. It's a lot of work. You have to really be the loving, wonderful, socially aware, capable person you pretend to be during events. You don't fully get down time like other people do. But it's totally worth it. I function as an organizer, and most of the TAG organizers do, by being professional but also accessible. They're vulnerable but powerful. They're unwilling to take garbage but they're willing to call in rather than cause harm. They're there to do the labour but also the first ones to say they can't when they're unable. They're a miraculous, intense group of people who are doing their best.

They're fierce. We're fierce. We weren't always like this. Toronto Area Gamers has been a thing for over ten years now and I've been with it since the beginning. I've seen us do amazing things, stupid things, bad things, great things, and eventually come to the point we are now. It's hard to change the direction of a group. But we did. We went from being the usual all-men, sexist jokes are normal and racism isn't far behind group of gamers to an inclusive, take no shit, support our people community that has integral members and a common belief of inclusivity and love. It's been amazing to see that growth.

It was done with team work, a common vision, and slowly putting policies into place to support what our message was. It was done by having tough conversations, stripping away our defences and looking at where we were weak, and then taking steps to fix those. The remedy to our problems wasn't more pats on our backs about what good we were doing, it was asking how we could do better. We still ask that question and I will always ask that question. How can we do better? How can we be better? And most importantly: How can I do better?


Communities need vulnerable fierce leaders.
And you know what I say.