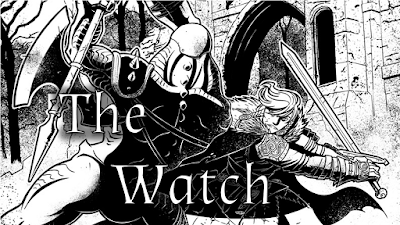 It's not very often I stumble across a game that personally resonates with my lived experiences. It's also not very often that I leave a game feeling empowered. It's not an emotion I angle for and it's not something I often get out of a game, because I often play women, and the women I play aren't usually in situations where they're fighting. Or if they are, as in the case of a hunter, they're fighting their friends and that's not empowering, it's just painful.

Of course, the solution would be to play more traditional "going out and beating the bad guy" games. Except they don't give me the emotional payback I want. So when I was talking to Andrew Medeiros and he mentioned his new game he was working on with Anna Kreider, about women warriors being badass and fighting against this invasive force called the Shadow, I was like "Oh my fucking god, yes please!" We playtested it within the week and I've been playing sessions of it ever since.

The Watch is a game about this unstoppable force (spoilers: It's stoppable) that's invading your homelands. It turns men against the clans and distorts reality and corrupts those it touches. It's an intense, horrible force. Because men are more susceptible to the call of the Shadow, they're pulled back into the homelands and women form an army to stop the spread of the Shadow and protect the new border of the remaining homelands. This army is called The Watch.

Mechanically, the Watch is a Powered by the Apocalypse game with a lot of additional moving pieces to help create an intense, war-focused situation with beautiful, relationship building moments between missions. There's definitely a touchstone in the game from Night Witches, and it's just as elegant and interesting as its predecessor. Each of the playbooks are nuanced and clever, and offer a variety of roles to take on in the fiction.

There are some great moves in this game, including the Mission move. Much like Night Witches, there are times when you go on missions. In this case, you go on a set mission that the facilitator sets out for you, such as defending a stronghold or protecting a caravan. These smaller missions eventually let you advance the game to the next stage, which is beginning to push back against the Shadow and retake your homeland. Eventually, the game builds until you face the Shadow, and have an ultimate blow out. 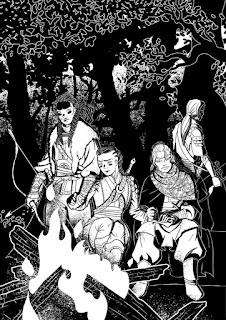 Because you're at war and shit is fucking hard, there's a jaded track. This jaded track is akin to corruption that we've seen in Andrew Medeiros' Urban Shadows game. It gives you jaded moves, which naturally are badass but come with heavy cost. I didn't get a chance to play with this mechanic much, as we haven't played through a full campaign yet, but I'm excited to see my Bear deteriorate. The Jaded track also really drives home your first character probably won't be your last. The war against the Shadow destroys people, constantly, and it's going to destroy you. That you get to watch yourself become bitter and broken is part of what makes the game so evocative.

Blowing Off Steam, one of the moves that lets you deal with your broken self, really shows how much pressure these women are under and how it gets to them. A few of the other moves, like Resist the Shadow or Let the Shadow In allow you to engage in toxic behaviour, or call out toxic behaviour, in the game. This happened one time when we were playing with two guys, whose characters got into a pissing contest with each other over something. The Gm wisely went "Resist the Shadow. You're behaving like Shadow-touched men."

It was so poignant and really drove home that you're playing women in the war who are afraid of becoming what their menfolk have become. I really really dug it and I love that the game focuses on the social interactions of women and how that looks in a stressed situation. There are several games I've seen that are about women, but mostly just seem to be games about men inverted, which isn't fair. Because it turns out the social pressures on women and their gender roles are different, so a world run by women would be different (and toxic in its own way). The Watch navigates this space really really well by having the touchstone of the old world be called out through mechanics.

I've had the great luck of playing the game with both my friends, random groups, and playing it with Andrew and Anna, with Anna at the helm as a badass GM I can't wait to play with again. I've seen the game through a few variations as playtesting evolved it, and I have to say, the most recent version I played made me walk away wanting more and more. The world has evolved from "you're in clans" to "these are the clans, these are some hard questions about them, and these are the reasons they matter."

In the game, the clans have dissolved in an effort to unify and work together against the Shadow. Of course, old habits die hard and clan lines are still important to the women. The game allows for this space of historical conflict, one we find in communities working under a unified front to fight against something. It's very normal for a group of people to break down over ideologies and old issues. The fact that the game lets you play in this space is fascinating, because it gives the world life and colour. 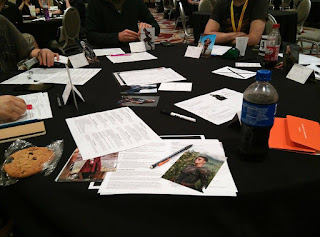 Like all PbtA games, creation is fast for characters. You get to choose a bunch of things. One of the things that's important, is your gender. The game doesn't divide into men, women, androgynous, or transgressing, like many hacks do (and I don't think those four choices are adequate or good anymore). The Watch gives you a swath of gender choices, all more femme focused than anything else. You can be genderfluid, trans woman, genderqueer, and yes, you can be cis-woman as well. You also choose your presentation and how you're performing that gender. This game embraces that conversation, and it's one we need to see in our community more.

Having also been a GM, I can say it's a lot more work on the GM's side than other PbtA games like Monsterhearts. There's a Shadow and what it does needs to be watched carefully. You need to track the allies and what happens when the Shadow gets ahold of them. It's a lot of emotional trauma on your players, and making sure there's space to discuss that while also keeping the pressure on them. It wasn't my strongest game I've ever ran, but I really loved the challenge of doing it. I really want to run a full campaign of it once it's out.

Overall, the Watch really shines as a way to let people explore fantasy war through the lens of women*. It lets you fight a big ass bad guy with serious guidelines on how to do that. It lets you do missions, fall apart, and try to hold each other together. It also allows for a really uncomfortable space for women to be haunted by and tormented by the men they loved and may still love. It's an emotionally intensive, explosive game that promises a world of pain and victory.

I'm excited to see the final product. I want to see what advice they have for GMing this game, as it is the part I struggled with the most. It could be because beginning generation is a bit of a process, as you pick things about the Shadow and the world around you that you have to immediately grok to get into game. I think I would do this and then do the first episode later after I had time to think about it. This is the chapter I'm probably the most excited about.

I also really hope the game doesn't pull back from having an important discussion on gender, presentation, identity, and bringing its players along with it. For the sake of inclusivity and making our community a better one, this game really has the potential to have that conversation. I trust in both Anna Kreider and Andrew Medeiros to navigate that space excellently and I really hope it has the impact I want it to. I've heard so many genderfluid and trans women talk about how the game finally made a space for them to be the heroes, for them to be main characters. And that's so important to have in our gaming space. We need this.

If you want to play badass women kicking ass, taking names, and saving the fucking world, check out the Watch. Lucky for you and me, it's on Kickstarter right now and you can go and back the shit out of it. If you can't, that's okay too. I'm sure it'll be hitting a table near you soon.


Stop the Shadow. Save the world. Join the Watch.