Game Review: The Hour Between Dog and Wolf 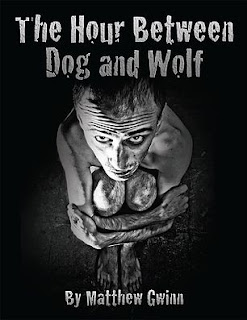 Unlike a lot of games that have fantastical settings or premises, The Hour Between Dog and Wolf doesn't open up its book or website with flowery language and a captivating blurb. It's not that kind of game and it needs you to know that it's not that kind of game. It opens up with a simple, unsourced quote: "To fight evil we must first understand it, and to understand it we must, for a time, embrace it." That's all the game gives you besides a three paragraph blurb about the game itself, stating it's about a killer and an obsessed hero.

Now if you're like me, you love to dance in the darkness of humanity and see just what we're capable of from a safe and neutral distance. I will watch all the documentaries and films I can about serial killers because there's something inherently fascinating for me about them. I've read transcripts from murder investigations and back before I had a wide emotional spectrum, aka, when I was still on the birth control pill and could handle emotional things, I would look at crime scene photos. There's something about killers that fascinates me and a lot of the world.

The Hour Between Dog and Wolf is a game that allows you explore that darkness from a semi-safe distance. It's a two player game. One of you plays the killer and one of you plays the hero. The hero tries to catch the killer while losing bits of their humanity and sanity. The killer tries to kill without getting caught and destabilize the hero. It isn't a campaign game, it's very much a one shot. But those hours you're playing become dark and emotionally intense really quickly.

A basic overview of the mechanics begins with the hero choosing an archetype, such as vigilante, police detective, private eye, etc, and getting a bonus that goes with it. The killer chooses if they're organized or not, and their motivation. They both assign their traits. The Killer's traits are Compulsion, Cunning, and Control. The hero's stats are Obsession, Stability, and Consciences. These stats are pitted against each other in different types of scenes. 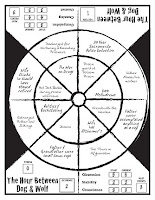 After this, you take out your wheel and begin to ask questions of each other and of yourselves that will help frame the scenes. On the wheel, you'll intersperse these questions to each other as themes you want to explore in scenes. I recommend being a little broad with these, as very specific questions can make scene generation a little difficult. You'll write your stats on this sheet and then prepare for your first scene.

The first scene is always a killing scene without rolling by the killer. It sets the tone for your story. It's a chance to go into as much graphic detail as you want and really press upon the hero how horrifying your killer is. In my first play through, we played in post-Ripper era London, England. Why? Because why play it as laid out. I played a madam of a brothel, and was the ex of the police investigator. I was maybe also a vampire, we hadn't really figured out what I was, but it was clear I was more than human.

We chose to play in this setting because of a suggestion that my friend had read about placing it in different time periods. Now in play, you select a scene type, your partner sets the scene, and you roleplay it out until you come to the moment of "roll to find out" and then you roll. You're rolling against each other. If the player succeeds against the narrator, then they get things to help them, like upping their stats or their kill count or their evidence. If they fail, the narrator gets bonuses instead.

While being the killer is fun and fascinating and makes you feel like a really vicious badass, being the hero is the sweet spot, at least for me. On one hand, I loved playing a female serial killer the two times I've played a killer. It was vaguely empowering if horrifying, and the reasons behind killing always proved I was a feminist. My vampire madam killed men who affronted her in some way and tortured/mutilated them to display their sins to the world. My other killer also tended towards killing men, mostly as a way to get revenge for a shitty father figure.

Being the hero though? That's soul sucking. You're playing a relatively good person who's losing themselves as they acquire PTSD like symptoms of trauma and become obsessed with finding and stopping this killer. As you become more stressed, the killer can cause flashbacks and other trauma events to happen. It becomes an unrelenting test of your focus and your ability to cope with what's happening. I had so many feelings of fear and anxiety and that overwhelming sense of something coming for you. I know my one journalist protagonist ended up shooting someone in a scenario the killer had set up to see if she would blink or not. It tore her apart.

Initially I saw this game as my way of paying Hannibal (the television show) and exploring the romance-like dynamic between Will and Hannibal. Well, that hasn't happened yet. Realistically you could use the game to do that with two or three playthroughs and starting with higher stats than it recommends so it would take longer to wear each other down. But that's not where the game shines.

The game shines when you play something akin to Seven or The Fall. The Fall is my favourite example because, as a show, it spends as much time following around the killer and showing them in daily life as it does with the police investigator and as a result there's a level of intrigue and humanism to the killer. Until he kills. It's not quite so in depth in the game, but you do get that sense of a killer watching other people while going about their daily lives. They're a predator, and they're waiting.

When I first made contact with designer Matthew Gwinn, and told him about how I had played, he remarked that I was perhaps the first woman he had seen play the game, and I was also the first person he had seen use torture in the game. I was the first person to push that envelope. I found that interesting because generally, if you have a game that gives you permission and mechanics to go there, why wouldn't you go there?

I really enjoy the game. It's a quiet intensity that grows. You maybe don't know how intense it'll be when you first sit down and say "Okay, let's be killers today." Having played it a bunch, I recommend you don't play in a medieval setting necessarily, if only because scene generation can be frustrating as there's little to no medical science and finding clues is much more difficult to frame. That being said, it does give you the gross understanding that crime investigation before modern science was much like how it is in Murdoch Mysteries... it's a little ridiculous and a lot of asking strangers questions.

Overall the game is well written and clear. It tends to use a little bit of ableist language around madness and insanity. When Matt and I talked about this, he changed it. Just like that. It was awesome to see a designer listen and say "shit, you're right" and edit it. Unfortunately the print copies still have the language, but the PDF doesn't, and that's pretty fantastic. The art is made up of darkened photographs, mostly white folks, and mostly female victims. There's no sexualization and there are definitely women in different positions of power within the hero archetypes, but the large amount of female victims compared to the one or two male victims threw me a little.

Which isn't to say women aren't usually the targets of serial killers, because in pop culture they definitely are. I'm not sure about the stats in terms of women who are targeted by serial killers, but I know from my own experience reading and watching, the victims are often women, except in rarer cases. But it would be nice to see dead men posed as much as dead women.

The wheel mechanic isn't intuitive or all that sensical. It's used to help generate scenes, but the way it does so makes it a stretch. I had to stop and think several times to try to find ways to incorporate the questions on the wheel into the game itself. This happened to my partners as well, so it wasn't just me. I know there were a few times we just ignored what we rolled and ran with a different scene because it made more sense to us. It is cool to have this big wheel at the end of the game.

It's decently researched and does invoke popular serial killer drama feels. If this isn't your genre of choice, you're not going to like this game. It doesn't have anything for people who aren't into it. Which is fine. It very much knows its audience and is feeding into that. I'm a little sad it's a one shot and doesn't have additional ideas on how to make it a little more episodic and longer, as it's not an easy game to get people to play so your bang for your buck can be small if it's just you and a friend over and over again.

The game flows nicely and is easy to play. It lets you challenge yourself to go into uncomfortable situations and then go further. It lets you touch a little on mental health and the realities of working in a highly traumatizing environment. It lets you be a killer and haunt and hurt someone because you don't like them or because they might catch you or because you just fucking want to. It lets you be the hero, broken by the end, with only a chance of victory and only if you lose yourself completely.

The Hour Between Dog and Wolf
Price: $15 PDF, $25 softcover, $35 hardcover
Players: 2
GM Work: None, there's no GM
Materials: Book, dice, a bunch of printouts for easy reference, character sheets
Feel: Dark, angry, violent, upsetting, oh god
Rating: 4/5 Stars. The game does what it says on the box. Some of the mechanics are clunky and the art isn't great. But oh the places you'll go.