May 10, 2016
So normally I don't really copy and paste anything from the game text. Or from the websites. Or anything, really, from the game itself because why would I when I have a decent vocabulary and fingers to type with? But check this shit out:

"You can't sleep. It started like that for all of us, back when we were garden variety insomniacs. Maybe you had nightmares (God knows we all do now), or maybe you just had problems that wouldn't let you sleep. Hell, maybe you were just over-caffeinated. But then something clicked.

That was when you took a long walk down the streets of the Mad City, stopped being a Sleeper, and started being Awake. But that click you heard wasn't from the secret world snapping into place. It was the sound of the Nightmares flicking off the safety and pointing a gun at your head.

They can smell you. The Paper Boys are closing in, and you'd better pray you don't become a headline. You're chum in the water, my friend, and it's time you got ready for it... before the clock chimes thirteen again. Now that you're one of us, there's just one simple rule left that must dominate your life.

I mean seriously. How fucking compelling is that?

When DRYH stumbled across my lap a few years ago I remember laying in bed with my partner, reading to him the world and baddie descriptions aloud. My partner doesn't game (I know, right?) and he found it almost compelling enough to start gaming. He's in theatre and film. He immediately said "This needs to be a television series."

DRYH, at it's core, is a fantastical game of running the fuck away from shit that wants to kill you, or worse. It functions on an almost Gaiman like Neverwhere universe, where all the lost planes are on top of buildings, where there are markets you can sell memories and laughter, and where things have a very literal interpretation. It's a waltz through a bad dream, while simultaneously being fascinating and also terrifying. City of Lost Children is another movie that came to mind. There's a little Phantasmagorical content, that's somewhere between dark Alice in Wonderland and steampunk/dieselpunk.

Fred Hicks' game is one I've had varying levels of experience with. I've run it as one shots, mostly, for random strangers. I've played in one campaign where the system was used but the setting was Necessary Evil. And I ran a campaign of it but used a different setting. Why are my friends and I using the system in a world other than intended? Because it's a great, interesting, and curious system.

Basically everyone is more than human. You get asked some interesting questions, like "What's keeping you awake?" and a few others. Then you get dice pools of Discipline, Exhaustion, and Madness. Discipline is how well you do things, and it goes down when bad things happen. Exhaustion is you upping the ante, you're tapping into an exhaustion talent to make yourself a little bit more than human. And Madness is when you do something utterly inhuman but fucking awesome. 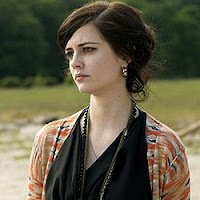 So I'm playing my psychologist, Dr Ryan Klein, who reads kind of like: She's a psychologist who works with high level government agents/the military. Her exhaustion talent is reading people like books, meaning she's superhumanly good at reading people, but just a little. Not to the point of being necessarily unbelievable. And her Madness talent is wiping, creating, or altering memories. That's crazy. So it's a madness talent.

When you roll the dice, the GM will have a 'pain' pool of dice. It's how hard things are. So I'm in a car wanting to rip out some of this dude's memory to see what happened to him. I reach behind me, while driving (best idea ever) and grab on to him and then begin to live his memories backwards as I take them. I roll 3 discipline, 3 exhaustion (because once you put them into play you can't get rid of them without some other mechanics to help), and I look at the GM. Rach, my epic GM, goes "That'll be all your madness, Doctor." 6 madness. My dice pool is 12. Pain is 7. This guy is superhuman, after all.

The dice fall. I have the most successes, so I win. But my dice pools are all pretty low, not too many high numbers. GM's pool reads 6, 6, 6, 5, 3, 1, 1. So while she loses, Pain dominates the scene, making it darker and it's gonna hurt. So I lose control of the car as I actively feel and remember his death. Ow.

This system was modified by Rach and I to make it fit for other settings. Why? It lets you do superhuman things in ways that cost and drive the story ever forward. It isn't a system for a slow game about chatting and getting to know each other. The system facilitates epic scenes with dangerous and badass outcomes. Odds are, you'll succeed, but it's gonna cost you. Maybe your madness dominates and you go fucking nuts that scene, beating the the shit out of friend and foe. Or maybe your exhaustion dominates, and you get a little more tired, a little bit closer towards falling asleep and never waking up again...

How do you modify? Ask different questions. Easy peasy. It takes about twenty minutes, if that.

When I ran the original setting, which is brutal and beautiful, I found it was very reliant on players feeling threatened constantly. It required the players to be on the run, nearly all the time, in an unrelenting way that after a few hours often felt a little less compelling. Mind you, I ran it about six years ago, or more, and I didn't have the GM chops I have now. It does not necessarily have mechanics that facilitate heavy dialogue roleplaying, but they could depending on the powers you take and how your talents work. There was great role playing in the two games I played where we weren't running the core setting, so I'm convinced it's there and I just need to retry the game.

But it does require players who WANT to roleplay. Because there is no mechanic to facilitate that level of interpersonal drama or storytelling, the game trusts you and your friends to do that on your own. What DRYH is really really good at is making incredibly memorable and intense scenes and forcing you to pay for being awesome. It's a trade off system that keeps tension high and keeps the players constantly playing a devil's game, where you must do things but each roll drives you closer to a worse outcome.

The supplement that came out for DYRH, Don't Lose Your Mind, which gives some ideas for the world. This really helped me get the feel and the flavour back from what I had found stagnant at times in the first book. It helped ground what the stories could be like, if you wanted them to be, and I very much recommend picking it up. And if you cant get enough of DRYH, there's a board game!

Overall, I would play this game any day of the week or weekend. I love it. I find it compelling. It grabs me in ways most systems don't. It's one of the few systems I would say "Sure, I don't want to play another Powered by the Apocalypse game, I'll totally play DRYH." That's rare because I am, like man people, enamoured with PbtA games. DRYH is fresh, cinematic, intuitive, and awesome.

Example: My players are in an apocalyptic fairy tale world where fairy tales ruined the world and the two realms (ours and theres) combined and blew up. One player, Rob, is playing Merovich, King of the Franks (from stories). I tell him a train is coming towards him. He says "I stand there." It's all his madness dice and his exhaustion is pretty high. But he's a fucking warlord barbarian. No train is gonna tell him what to do. So he rolls. And he wins. I mean, it fucking hurts, but he wins. The ongoing joke is he "stopped a train with his face." It was amazing and lead to two hours of role playing while the train community tried not to be controlled by the warlord. How. Cool. Is. That.

Don't Rest Your Head
Price: PDF $5, Don't Lose Your Mind is $10
Players: 5 is the sweet spot, but I managed 6. 3 - 4 was also great.
GM Work: Limited. You can run this off the cuff if you know your world well enough.
Dice: D6's. Lots of em. In 4 colours.
Materials: Character sheets, cheat sheets for how to do things
Feel: Urban fantasy with a lot of horror
Rating: 4/5 Stars. 5/5 with supplement.