Showing posts from 2013
Show all

Trolling With The Boys

November 29, 2013
Remember how I was going to only have the obligatory sexism post? Well! I lied. So a few days after the first incident on Old School Gamers, I dared to click the little icon on my Facebook page just to, you know, see if there were any interesting posts (like about teaching your kids to game, or systems used for Aztec settings, or the gods as tangible), which there were (obviously), but there was also a picture. Of a naked woman. Wearing a chain. Just a chain. It naturally got messy pretty quickly. I'm happy to report I didn't really get much involved because, well, there's a dead horse, and I had a big stick, and decided I'd save my muscle strength for another horse on another day. But that didn't stop the multitudes from crying out sexism! and the multitudes from crying out "tastefully placed chain art!" and the mods from shaking their heads. Of course, this meant my name was brought up. And I was sent messages, both of support and of "you'r
Continue » 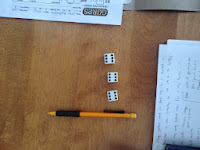 This is a critical fail. So my good friend and epic GM J is running a GURPS (I know, right?) game he's lovingly called Tales of Adventure . This game has three groups going, each within the same world and the same country, so far. At any point, logically, our characters could meet up, clash swords, order heads be removed, become friends, or fall in love. Anything is possible is this vast and war torn country named Tandesea. I've played GURPS before, twice. Both times with J, so I can't say I know if he's running it correctly (although I doubt he's screwing with it much, he likes rules), but I will say it's becoming increasingly more smooth in every carnation he presents it. The first time was with a game called Chronicles of Ancient Darkness , based on the novels by Michelle Paver. Our characters weren't designed for combat, and there ended up being a lot of combat, so it got a little boggy. In the second game, Shakleton Crater, J brought us to the
Continue » 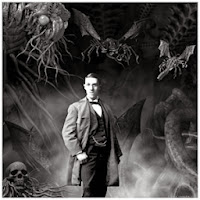 If you're not familiar with H.P. Lovecraft and his racist yet awesome short stories and novella, then by all means, this post isn't for you, and also: Where the hell have you been ? Seriously? For the rest of us sane people who give a nod to one of the biggest names in horror, you'll also likely know that role playing in Lovecraft's fiction has gone through several incarnations since it's original inception as Call of Cthulhu published in 1981. This game used the basic premise of the horror of Lovecraft's world, specifically that of Cthulhu, and combined role playing in the 20's. I own (of course) and have played Call of Cthulhu, the newest edition of which has you playing investigators using percentiles to determine if you do or don't succeed at your actions. As some of you may know, there aren't many percentile games I like, or even love, Maschine Zeit being the great exception. Call of Cthulhu (CoC) is not a great exception. I found it clun
Continue » 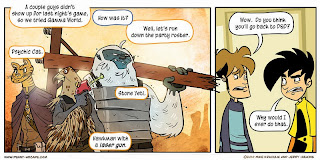 Tonight, my friend A. ran Gamma World for Toronto Area Gamers. Despite there only being two players, I have to say I had quite the hilarious time. So where to begin? Well, if you don't know what Gamma World is, it's a post-apocalyptic game full of whacky and weird creatures and inventions. In this world, the Great Britains (spelled differently) are conquering the world slowly. They wear animal helms to represent their fighting prowess (boars grunt and smash, wolves claw). My friend and I live in a small village occupied by the Britains for the last four years. My character, Nim-we , is a pyrokinetic feline. Yes. I am a flamey cat of doom. So how it works is you pick one random trait. The first thing I picked from the random options was pyrokinetic. This gave me the ability to breathe fire and have a fiery aura at will. Then I chose my second trait, and by magic, I got feline. So instead of being a cat-person a la  Doctor Who , I was like I'm totally a cat. I have
Continue »

October 26, 2013
While using Facebook chat to natter at my friends, I asked, what should I blog about? They all yelled about a variety of gaming things, from Forgotten Realms to 4.0 to gaming with strangers and most of them all mentioned scheduling being a gruelling and time honoured GM-breaking tradition. What GM hasn't suffered the woes of no-shows, late players, and the dreaded two month schedule talk that never leads to a game and just results in an entire concept being thrown out the window in frustration ? Yeah. Sometimes it's like this . I don't have a solution. Scheduling can make or break a game. There are several approaches you can take to getting the wily folks we call players to line up and get ready to roll some dice, but honestly, I still haven't figured out the best methodology. Here are the tips and tricks, I have learned though. GMs make the best and worst players So... ahem, not to toot our own horn, but I find most often the people who bail last minute or don&
Continue » 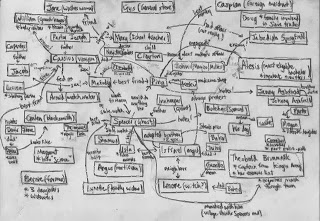 MonsterHearts : A game about the messy lives of teenage monsters ^ That title, right there, sums it up. I'm a huge fan of teenage monsters . When I was just a wee lass, being a social outcast and nerdlet in my local high school , I picked up the books by L.J. Smith . I can't remember which one I read first, but it was likely some part of the Soulmates series, and not the Vampire Diaries. I was already a fan of Buffy the Vampire Slayer , and so it seemed a natural progression of my inability to belong-ness that I pick up these books and become immersed. And as I got older, I started reading things like Laurell K Hamilton's Anita Blake series (seriously, what happened to her being awesome?). And then I progressed, naturally to Interview by Anne Rice. Eventually I got a little older (or a lot) and moved on past my teenage and early-twenties into a phase where vampires and werewolves took a back seat to lit theory, philosophy, poli sci and other school-like topics that
Continue »

Playing With the Boys

August 30, 2013
Okay. Okay. So this is the obligatory sexism-in-gaming-culture-sucks post. I was honestly writing something else for today, but then I was hanging out on Old School Gamers , which is a facebook group for gamers who like Old School Games (OSG). And there was a picture of a sexy female on a couch, posed, with a large plush D20 in her hands. The comments below the picture included, but were not limited to: "That looks so fun. I gotta get me one of those. The die is cool too." " Strip D&D... Never thought of that one..." and my favourite "It might be nice if she rolled my d20s." Being the angry little feminist I am, I was immediately pissed off. I mean, the picture was posted with the line "I bet she DM's without a screen." Seriously? So I decided to say something, and was immediately met with the " not my toys " mentality and how I needed to lighten up . Other people had mentioned how this wasn't inclusive, and how this w
Continue »

Most of you know I play table top role playing games such as Dungeons and Dragons (but not usually that game in particular) for about the last decade and a half. It occurred to me recently that I hate rolling dice. To the point where my GM says "Everyone make a spot check " and 75% of the time I don't bother rolling, or I respond with "Do I have to?" And she's wonderful enough to only make me roll when it's important. When she does tell me to roll something, sometimes with a knowing smile, my heart gives a jump, my anxiety goes up a little, and my chest tightens. Why? Because there's a likelihood I'm going to fail. And not just fail, I may roll a 1. I roll 1's regularly. Often, in fact. Or I fail at least. I'm known for it. It's to the point where I don't usually run games (and I run a lot of games) that require important dice rolls. My main game uses playing cards. I also no longer bring my own dice to games because it has be
Continue »

August 28, 2013
It's been a long time, blog. A really long time. I've spent two years updating my education in a madness inducing storm of anatomy, massage techniques, and hydrotherapy. But I survived, and despite a firm agreement to avoid gaming while in school, it continued to creep into my life, here and there, until I found myself gaming more days than I was going to school some weeks. Not that I ever skipped class or anything... So here's a short (and long) review of the past two years. Insert quaint folk music here. Heroquest About a year and a half ago I became involved in an on-going drop in game of Heroquest run by a friend. It had a large cast that I was very excited with when it first began that steadily began to drop off into a smaller, almost non-existent cast mid-way through. This was the result of busy lives and the scattered methodology with which our GM ran the game. When we were down to about four players, I began to recruit other friends, and drew in a regular in al
Continue »
More posts