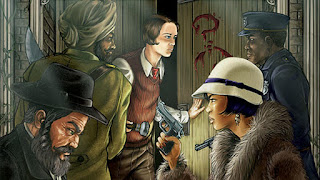 I spent a lot of time at Gen Con going to panels about inclusivity and making our community better. I learned a lot. I listened. I asked questions when things got derailed in an attempt to bring them back on focus. I asked questions with stuff I was struggling with personally. If there's one message I took away from the con, after playing Psi-Run and the Watch and Love in the Time of Seid I came to some interesting conclusions about my gaming experiences.

At first I thought my conclusion was that men can't share a table very well. Even when we were playing games about women's experiences, or men were playing women, they still dominated the table and the women had less speaking space over all. It annoyed me, even though I loved the people I was playing with. They are good friends. I didn't really play with strangers during Gen Con, but I did notice the way gender dynamics played into how much each person spoke at the table.

As I sat, listening to an amazingly diverse group of panelists talk about playing characters who aren't like you, I saw a bunch of people break it down into personalities and not what it means when you play someone who's a different gender, sexuality, race, or differently abled than you are. What does it mean to step into someone's shoes who have less privilege than you? Who suffer violence and abuse and scrutiny because of who they are?

I'm not here to give you permission to play someone not like you. Let's face it. No one can really do that. We white folks with all the privilege can stand around and wring our hands and ask for forgiveness or permission from folks who aren't us, thus forcing them to do the emotional labour of patting us on the head when we're worried we're offending, or we can take that labour away. Because honestly, we shouldn't be asking anything from people with less privilege than us. We don't need them to assuage our white guilt.

That's not their job. Not even close. And by showing up to inclusivity panels and asking if it's okay if us, as privileged people, play characters who don't look like us, we're asking them to give us permission and to give us cookies for our privileged guilt. It's okay for you to play someone who doesn't look like you. For multiple reasons. And I'm going to break down why it's important and how you need to stop with the bullshit. I say this as a person who did all the bullshit.

Before some awesome people sat down and laid out for me how I was being privileged, I was (and kinda still am) super nervous about playing characters who weren't like me. What if I get it wrong? What if I don't do it loyally? What if I minimize the issues around playing someone who isn't me? What if I fuck it up? Let's be honest, the last question is the one that worries me the most. And by fuck it up, I mean, what if I'm offensive.

For most of the privileged people I know, this it the real crux of the question. We are doing just as I heard someone say we were doing: we are wringing our hands asking other people to promise us we aren't doing wrong. It's such an easy trap to fall into. Good intentions and fear aside, though, it's a trap we need to start avoiding. If we want to see representation in our games, we need to be the ones doing it. We need to be hiring diverse creators, buying from diverse creators, and ensuring that all the characters at the table don't look the same.

Our guilt doesn't belong in that list of things to do. It's important for people with privilege to play people without privilege. Not because we should do whatever the fuck we want (we shouldn't) but because of the incredible power that gaming has to teach us empathy and allow us to see from a different point of view (even if that point of view is flawed and has all the blinders on from privilege). A few years ago a study was released stating that gamers were more empathetic than other people. I had a lot of conversations about it at the time, but it still has something to pay attention to.

Empathy. Gamers are good, in theory, at empathy. I'm not one hundred percent sold on the idea, but I do believe role play can help us notice our blind spots and perhaps teach us a little about compassion for those who live different lives than our own. When I was talking with a friend, he described privilege, in a way, as someone unable to see the world as it is. To the point where those with privilege are living in a different reality, in a way. 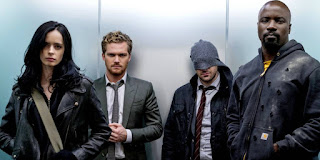 As I make my way through 13 Reasons Why, with all its loaded problems, it does a good job of using story to give the victim an ally. Why? Because listening to her story, and bearing witness to it, the guy feels bad for her. He gains empathy for her. Story telling is powerful. Sometimes it tells a story that doesn't need to be told, where we watch Defenders and see the story about the most powerful privileged character. We have enough Danny Rands in gaming. We don't need more. What we need more of is everyone around Danny Rand.

We know from watching Luke Cage and Jessica Jones and Daredevil, that the way those people experience the world is very different from how Danny experiences the world. In gaming, we have a lot of stories about Danny. About the straight white dudes with power. What we don't have enough of are stories about people of colour, women, disabled people, queer people, neurodiverse people, and trans, genderfluid, and nonbinary folks. And while we are often willing to play games that force us into characters that don't look like us, we often struggle to add that representation to our games when given the option to defer to what we know.

In games like Dog Eat Dog, Night Witches, Velvet Glove, Dream Askew, It's Nothing, and Autonomy, players are taking on the roles of people who may not be like them. Somehow, our brains don't break and we manage to play a game that demands we play people who aren't like us. Sure, it's makes us nervous and makes us worry we'll fuck it up, but we do it because we want to play that game. We want that experience. Or maybe just because we love those designers.

Regardless, we play a game where we are forced to play someone who isn't like us. And sometimes we play it for several episodes. We manage. Yet when it comes to our daily gaming where we have the option to default back to the comfortable, we mostly take it. We deliberately choose what looks like ourselves because it's familiar. What does that mean, though? It means we are unintentionally (I hope) make our games very homogenous. So suddenly we're a bunch of white cis het adventurers wandering around killing shit and taking their things.

You saw how it happened. You saw how quickly we put on the familiar glove of what we perceive as normal. But what we perceive as normal is what people who don't look like us know to be exclusionary and problematic. We are actively refusing to make our games diverse because we can't see the problem. Or worse, we see the problem but feel too comfortable in our privilege or too afraid to be offensive that we refuse to even try. We sit here. Being ourselves. Saying that is more important than being someone else.

Yet if we were to be someone else, we would have this amazing opportunity to learn something about that someone. Role play has the uncanny ability to increase our empathy. We can feel, to a very small degree, what being someone other than ourself would feel like. Of course, this is limited because it's something we can pick up and put down, which minorities can't do. Even still, this sliver of an experience is worth having, because we do several things when we do this. We normalize diversity in our games. We open up conversations. We learn a small tiny bit about what it's like to be a minority. We learn greater empathy. And we become, ideally, better people.

Excluding people who are minorities from gaming, even just as characters, because it makes us feel uncomfortable, is only exacerbating the problem. We severely need to stop tapping out because our poor privileged feelings, give ourselves space to fuck it up, and learn from our mistakes. That space, the space we give ourselves to try it out and screw up is important. Even the most woke of us fuck it up and get it wrong. We learn, we educate ourselves, and we make sure we don't do it again. When we start playing minorities in games, we need to give ourselves that space but also do the research.

Research means looking into blogs and writing by diverse writers who speak of their experiences. Asking your minority friend to tell you about their life and experiences isn't great. Don't do that. That's asking them to do labour when you have the internet available and it can be invasive. Go to the internet, looking for blogs and articles about the issues your character would experience and the world they would exist in. You can bring some of that to the table, or not as the games goes. But always remember you're playing a human being.

Whether we're playing a person of colour, a woman, a non-binary apocalypse survivor, or an abuse survivor, it turns out, a human being is a human being. They're complex. People are complex. They are not a singular experience that is their ethnicity or gender or ability. They are a series of life experiences, most of them not based on what makes them different from you. Most of them are just normal life experiences, breakups, love, hate, discomfort, work, etc. They are people, like anyone else, who have the same foibles and fears as anyone else.

Even when we have the best of intentions, we can often just fall back into the comfortable. Give yourself the amazing chance to play people who don't look like you. And use those moments to push diversity into your games. Do some research. Let yourself screw up. And encourage people who look like you to do the same. We need to normalizes marginalized people being in games and being characters in games and having power in games. We need to stop playing with homogenous characters and start pushing back at every level.

Playing characters that don't look like you is a half step forward. It can start there. Play the games by minority designers about minority experiences. Play the games that don't let you choose homogeny. Support the people who are talking about this topic by backing them on Patreon and sharing what you've learned in your games. Be responsible for your blindspots and unintentional exclusion. Own it. And then break it down and remove it from your games and also, your community. Challenge it when you see it.

Be vulnerable to the learning experience and be open to the empathy that gaming as someone else can teach you. Stay fierce when you screw up and learn from your missteps along the way. Remember this is worth it, it's important, and it will make you and the people around you better people for removing barriers and systemic -isms from our community. You can do it. I believe in you.