Off the Beaten Path: 3 Little Games

July 31, 2017
Between conventions, retreats, hang outs, meetup, and monthly events, one of my favourite things to do with my friends is try out weird little games. It's how I end up playing things like Lost in the Rain or Slayers or Before the Storm. At every turn, whenever I hear someone mention the words "it's this weird little game" I'm instantly listening and usually buying just moments later. I love one shots and I love intense experiences. So far, I've found the best way to get that in the short term is these tiny little games.

What makes a great little game? The same things that inspire any good game: it hits the notes it promises and hits them hard plus it's easy to play and grok. When I'm playing these games, I'm looking for how many hiccups there are on the way, how good it is at pulling emotional feedback, and how much work it is for me as a gm or a player. To me, little games should be pretty fast to pick up and play. There shouldn't be a tonne of rules, but it doesn't need to be a one page micro-game, either.

Now, knowing me as you do, you would know how much I like being sad. I also love feeling like I'm in love, the ache of love lost, and the fear of tension and anxiety around death or pain. I dig a wide spectrum of emotional feedback, but these three little games are about relationships. They vary from relationships gone south, to relationships beginning and ending, and finally, to a sexual relationship. So buckle up and be prepared to dive into the world of love, sex, and the meanings we impart to them. 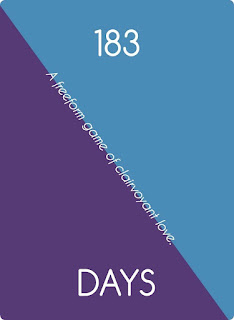 183 Days
Sam and Dylan are destined to meet. They are going to meet. They are going to fall in love. And their relationship is going to end. Sam knows this. Dylan knows they need to be with Sam or else the world will be in peril. Their relationship is intense, awkward, and beautiful in its own way. It's important to know, as well, that both of them are psychics. They can see the future. But where Dylan sees many possible paths, Sam only sees one and knows it to be true because when they were nine, their parents perished in a crashed airplane, something they did everything in their power to stop. It was meant to be.

183 Days is a beautiful little card game for two players. It involves hand holding and the flipping of cards as you explore the relationship and its decline from the perspective of Sam or Dylan. Each character has their own deck and their names are deliberately gender neutral so you can decide some details about them. You flip each deck in order, doing both at the same time unless the number on the card suggests the other deck flip a card first.

The buy in for this game is the premise. You need to be okay knowing you're going to be in love and that relationship is going to end. It gets super uncomfortable as the game progresses. But you get to experience scenes of each character talking to a trusted friend or moments like when Sam awkwardly confesses their love to Dylan or when Dylan picks fights with Sam about the future. The deck is well designed to really drive those moments home to the players.

Because it's only a two player game, it does a good job of making it easy to play. All you really need is the deck and another person. Play through takes about an hour or two, depending on how long your scenes are. The ending gets a little confusing as to which order the cards go in, simply because of the content on them, but overall you know how it's going so it's easy to know what's going on. Do not read the decks before you play.

I loved this game. I played Sam. There's a passive acceptance of life in Sam's cards that I found really beautiful and startling because it came from such trauma. They were the personification of "life's a bitch and that's how it is so might as well enjoy the good moments." I really loved playing Sam and I'm looking forward to one day playing Dylan. The hand-holding mechanics make intimate moments seem more intimate. It allows you to be more vulnerable in those moments and to really feel the connection between the two characters.

For under $20, you can grab this cool game which is worth a few play throughs plus all the other little games of it you're going to play with your friends as you introduce it to them. It's a brilliant little game with high impact and gut-punchy feels. It's sad. It's beautiful. And it's really cleverly designed. 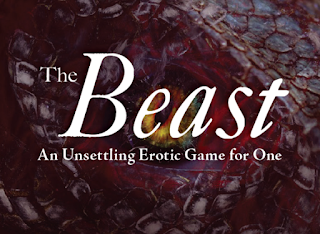 The Beast takes about 21 days to complete and about ten to thirty minutes a day to do. It's a solo adventure game, where you have a deck of prompts and you respond to one prompt a day. You begin your game by filling out a questionnaire about the Beast. You talk about what gender you think they are, what they smell like, what they feel like, and what turns you on about them. It's a chance for you to really push your limits or to stay safe. The first time I played I wrote the beast as a kind of werewolf like creature. Bree Sheldon played the Beast, and wrote the beast as a tentacle squishy thing that was kept in the tub. It was super hot.

Regardless of your beast, you'll spend the next three weeks exploring your bestial sexuality as you unveil a card every day. Each card will give you a prompt and from there you'll write about what the card asks or suggests. The prompts are sometimes sexy, sometimes terrifying, and sometimes questions about how you keep the beast or how the beast keeps you. There's nothing in the game that asks you about you, so you can be yourself, or you can make a character who's experiencing the Beast, depending on your comfort level and interest.

At the end of the game, you get to decide what happens to the beast. Does it die? Do you let it go? And what does that say about you? There's also a decompress at the end where you think about and write about your experiences. Did you learn anything about yourself? Did this game get into your head? Did it turn you on? These were all questions I had going in that I sat down and unpacked after the game was done. 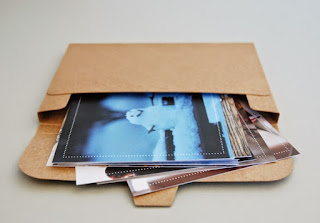 Les Petites Choses Oubliées
If you've seen The Eternal Sunshine of the Spotless Mind, then this game will sound pretty familiar. In Les Petites, you play a couple who has been together and broken up, and now you're off to get the memories of each other erased because the break up was just so awful and you're so heartbroken about the whole thing. Except you don't know your memories until you start playing the game, and the mechanic for that is photographs.

This cute little game is a brown envelope with a bunch of postcard sized photographs in it with instructions written on the back. Each of you choose a bunch of them and then hand them to your partner. You make your characters with the only necessity being they're young. You decide who these people are, what their differences are, what they're looking for in true love, and a bit about their financial or home life situation.

From there you play their meeting out until it's obvious they're into one another. Every time I've played this scene has been sweet and charming, if a little awkward. I've only ever seen the game played with two women as protagonists, which means we're always telling sad lesbian stories, but the stories have always been very compelling. Often it seems that the differences between people end up being their economic status, which leads to class differences. These two people have a short, intense relationship and then break up.

In the memory retrieval therapy means that you flip over one of the photographs and describe the memory you're erasing. The other player can add something to the memory or ask a clarifying question as the therapist. These memories reveal the best times and the times that things began to fall apart. Once it's clear why things went south, you end the therapy sessions and do a brief prologue on if they erased all their memories, if they ever got back together, or if they decided to never know the other person again.

Watching the movement between happy and awful memories is really beautiful. The photographs provide an excellent jumping off point, much like the prompts in 183 Days and The Beast. It's a sorrowful, beautiful, cathartic game of failed relationships and the lengths we go to forget what happened between people. There are vulnerable moments, tender moments, and moments of anger and hate. The other player gets to describe your character from their point of view and your actions from their point of view, meaning that you end up with two sides of your character, your intention and how you're perceived.

For $20 this delightful little game can be yours. And once you're bored of the photos provided, you can just make your own. Character creation is fast and all you need is a scrap piece of paper to jot the notes down. It's a really poignant look at relationships and I recommend everyone play it at least once.

Each of these little games is a stunning glimpse at humanity, relationships, and how we see ourselves and how others see us. I've played all of them and all of them caught my heart, gave it a hard squeeze, and then ran off with it. If you're into exploring relationships, sexuality, and heartache, I'd recommend finding a person to play Les Petites and 183 Days with and then endeavouring to explore The Beast on your own.

Human relationships are dynamic, fascinating, and flawed. Playing through them without having to manage the scope of the fiction around other players and a bigger plot lets you really dive in deep to them. It lets you truly feel them and explore them and let the scenes breathe. Two player games really drive that fiction. Intimacy takes centre stage in all three, and there's no one outside to tell you to hurry up or to shift the spotlight. Enjoy it. Be uncomfortable and marvel at the beautiful tragedy that you've just created.