One of the most satisfying things in the world is playing out an entire season of a television show you wish you could watch. And that happens sometimes. Sometimes you manage to make it through nine or twelve sessions of a game and come out with a full beautiful arch, where everything has been woven back in and you're left on a great cliffhanger for next season but so totally satisfied with everything that happened this season. I mean, nine out of ten times this doesn't happen. Scheduling, mostly being the problem. But when it does? Gold.

Last year at Jiffycon I sat down at a table with a lot of amazing people, including my best mates Rob and Rach, Shane Liebling whom I've come to love immensely, and the ever impressive Glenn Given of Games by Playdate. Hearts Blazing was on the table and since I had backed it on Kickstarter, I wanted the chance to try the game. I had played Ten Candles earlier that day with Glenn and had enjoyed gaming with him, so I was delighted to see he was facilitating.

Turns out, it was one of the games his company had designed. Hearts Blazing is a brilliant little card-based story game that lets you create and play through one season of a sci-fi, trope filled television show. You and your fellow players each take on the role of one classic science fiction trope, like the rookie, the ace, or the veteran, and then set up each episode of the television show using the cards to guide your episode and how you overcome the obstacle.

In a brilliant way, Hearts Blazing can be anything you want it to be. It definitely shines in its genre, but easily could be other genres as well with a little tweaking. The cards and deck are beautifully designed, and it comes in a nice little compact box. If you know how to play, it's pick up and play. And if you don't know how to play, set up can be pretty fast. You get your friends, choose your setting, and make each person responsible for a part of the world. In the most recent game I was in, I was in charge of Technology (which is a huge thing).

Then you choose your characters, or in our case, randomly deal them. Your card tells you your archetype and gives you some examples. It also comes with a deck which you will use to overcome obstacles in the show. After this, you get a motivation card, which you keep secret. It tells you what keywords matter most to you on the obstacle cards, and thus guides you on how you should play your character but also how you should bet your points on the obstacle cards. 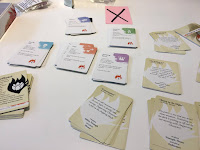 Each round consists of an opening scene. So you flip over your first card and it will tell you who the focus of this episode is. It could be any of the characters. That player reads the cards, notes the keywords to the group, and then narrates that opening scene. You can play out scenes or just narrate what they look like, which gives this game a great versatility for whomever is playing. The first time we played, we mostly narrated. Now when we play, we jump in and play out every scene.

Once the opener is finished, each player chooses a card from their hand to bid. If it's episode one, the total points needs to be 1 or more. If it's the second episode, it needs to be two or more. If you don't have enough points to "win" the episode, then the final narration ends in a downturn or on a cliffhanger. Bidding done, you flip over the cards. The person with the highest cards is the "winner" of this round and will get to narrate the final scene. They also get to note the two top keywords. The person who got second gets the second listed keywords.

Now the bridge happens. So you use the cards you just played (or don't, it's freeform like that) to play out or discuss the scenes that happen between the bridge and the wrap (closing scene). This is usually the longest part and if you dig the cards (which I super do), they give you some good guides to help frame scenes and set up rising and climax action. Once you've gotten to where you feel the episode would almost end, you go into the wrap. The player who bid the most points gets to narrate the wrap, either for a good ending, or for a bad one if you didn't have enough points for a good ending.

Play continues this way until you hit the two parter season finale. By now, you hope you have enough points to end on something positive. Regardless, you play as before, but try to bring the show to a wrap and end off on something interesting and compelling. Then the player who got the most keywords gets to narrate the epilogue last, with the person with the least points going first. Once the last epilogue is done, the game is over.

It's definitely short and sweet. It's a bit more complicated than I laid out, but that's the core basic structure of the game. If you don't want to read the rules, hell, you can go to the website and watch their video on it. There's a cutting sense of humour in the book and in the company that I have to say heavily reminds me of Glenn and I really dig it. The book, tiny as it is, gives you all you need to play and really understand that Hearts Blazing is a launching pad for this great creative endeavour you are about to undertake.

Hearts Blazing is unique in that it manages to give you the tools to make a really dynamic, compelling, and perfectly balanced experience of watching and playing in a full season of a science fiction show without needing all the time in the world to play through a full series. Every time I've played this, so many cool narrative and in character things have happened that I keep wanting to play more. I've ended every season wanting to play another. Not many games have me excited to play another season. I think part of the beauty of a one-shot season is that it allows you continue to want to play more of that show without feeling like you need to sit down for another nine sessions to get a full story.

And a full story it delivers. It uses a deck building mechanic at the beginning to get multiple focus episodes. My advice: Ensure that you do this with balance. Make sure each character gets at least one focus episode, and try to have a number that's even between all the characters. This first time I played it wasn't balanced, and I didn't get a focus episode while someone else got four. It's good to spread the love and the spotlight so you can see different aspects of everyone's characters. If you're playing multiple seasons, make sure to try to get a variety of each focus deck so you're not getting the same scene prompts over and over again. 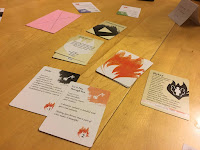 One area that the game didn't thrill me was the "win" mechanic. The game's motives, such as opportunist, saviour, or avenger, provide you a guide on how to play your character. They offer some flavour and kinda function like your secret missions in Dead of Winter. Except you have to play to these to pay attention to the keywords on the cards and thus know when to bid high to get at least first or second. It adds an element of calculation to the game where certain motives are always going to shine more in certain episodes because of the keywords.

Now, I always fail at this because honestly I have no desire to win and I give no fucks about secret motives. That being said, I can totally see how people who love win mechanics or who love to gamify things are going to dig this. There's a reason it's there, the reason just doesn't compel me. Fortunately, despite it being not for me, it doesn't hurt me if I don't engage the mechanic too much, because it's a collaborative game so generally by the end everyone has a strong vision of what's happening. Which, naturally makes me question if it's something the game necessarily needs.

All this being said, Hearts Blazing really gets into your head and pulls out all the science fiction tropes you love and have always wanted to fuck around with. It's intelligent and well designed, and definitely gets you where you want to go with a tiny card-based story game. It can be fast or slow to play, depending on how much role playing versus narration you do. It's easy to grok and because the mechanics are simple, it's fast to explain and get to playing.

It doesn't let you have as much lingering scenes and engaged, deep emotional feed that other games do. It isn't really meant to do that. If you played multiple seasons, it might finally get there but not necessarily. This game is about the story overall and less about your individual characters. If you're looking for intense emotional interconnectedness, it's not here. This is a game that's telling an awesome story with badass characters who have depth but it's not gonna be the levels of intimacy that some other games can provide. Now, with that in mind, a good group who's good at playing together could drive it to that place, but with a shorter season so there's more time to play out those connecting scenes.

The card mechanics are good. They're solid. The keywords and motives don't do much for me, and honestly, the cards you play to "win" a scene aren't great at helping guide you with the solution at first. It's all a little abstract for the first couple of episodes until you really find your groove. The game suggests that the cards are just there to be ignored if you don't find them helpful, but I've always found playing with the cards' suggestions makes the game stronger, even if they're vague and a little strange to engage at first.

Overall I really like Hearts Blazing as a great game to play between big campaigns, a fun one-shot for public gaming, and a great experience for people newer to story games. It's a great tool set, and I keep hoping they'll bring out more sets for other genres. I mean, sure, you could hack it, but why do that work when I could just beg Games by Playdate to do that for me? For the record, Glenn, I want an urban fantasy setting. Sci-fi is great and cinematic, but give me some vampires, baby. In all seriousness, the game is well worth multiple play throughs and can be a great, fulfilling experience. Easily worth the money you'll pay and then some.