Game Review: Before the Storm

Once in awhile you find a really cool game that lets you make dynamic, fascinating, faceted characters in a one shot. You leave the game completely satisfied with the experience you just had, but also craving more from the character you just portrayed. Doing it once might be a fluke, but when a game continually delivers exceptional experiences again and again, you have to own that it's one hell of a game that does one hell of a job.

Before the Storm is a freeform immersive story focused role playing game by Joanna Piancastelli and is nestled within the beautiful pages of Seven Wonders.  I hadn't heard of Seven Wonders or Before the Storm until my friend, Rach, wanted to run it for our monthly meetup. She was a little worried as it was one of those weird indie games that made people flinch a little when you said something like "there are no dice" or "there's no conflict resolution."

Of course, having heard that it was a freeform immersive rpg I was one of the first to sign up. The premise of Before the Storm is really fascinating and easily one you can picture. You play a group of adventurers who are about to go to war tomorrow. You have traveled together before, and the fate of the world now rests on your shoulders. Except the enemy tomorrow is vast and heavily outnumbers you. You will likely die. The odds are not in your favour.

So you have some peace before the end. Quiet moments before sleep, if you can, and then the war. This peace? It's the last dinner you'll have with your companions. All of you have problems with another in your party. All of you question the integrity of another. All of you need answers and to air your grievances before the night is over. You will ask penetrating questions of each other and find out the answers to your concerns over the course of dinner.

If you want to larp this game a little, and oh boy is it larpable, then play this game while you eat food. I've played it once while we ate dinner and it was interesting to play conversations as some of us ate. Another time I played it, we were drinking and enjoying some light snacks. Both gave a sense of being at a table or around a fire discussing our issues with one another. The table let us have good eye contact while also having some movement to not be cornered by a question.

The mechanics of the game are pretty simple. You deal out some cards, as the game uses a playing deck, and you spend your cards to choose your rank, your reputation, your value, and your passion. Then you decide your history, your kingdom, why you must earn victory the next day, and what you believe strongly in. After everyone describes these aspects of their characters, you choose one character to have issues with their belief, and one character whom you know a secret about that has to do with their value.

It's these issues that you focus on during scenes. Each scene allows you to ask one question. The character you asked narrates a flashback or role plays a flashback out that answers the question. Then we snap back to the present, the asker asks again and the character answering answers the question in the present. It doesn't have to be the same answer we just saw in the past. This kind of game reminds me of the Out of Gas episode of Firefly, where we're snapping into the past to see the truth of something and then jumping back to the present to continue our dinner and our discussion of each other's values and passions. 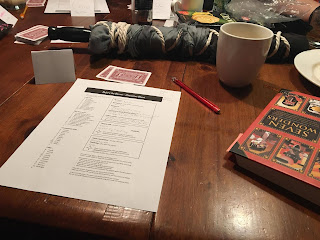 The coming storm is the Stormsworn. At the beginning of the game, you get to define them a little bit more, and the situation around your reunion. The Stormsworn, in my games, usually end up being oddly graceful and ephemeral of some kind. The first time I played the game, I played a general and war hero who had laid with a Stormsworn and become pregnant with his child. The second time I played, I decided to play a Stormsworn to give some gravitas to the situation at hand. It was a good decision, and it really added some serious tension at the table.

Both times I played, people wanted me to survive, so I was given a lot of black cards. It's interesting to see who people attach to and who people want to see survive. When I played my Stormsworn, I was deliberately annoying and snarky at everyone, and mean. And yet, people felt for the captured Stormsworn and wanted to see her life become better. It was interesting seeing who people were gunning for, and who thought their character deserved to die.

Once you've done several rounds, the dinner is over and there are no more questions that can be asked. For ever face card you've pulled, something awful has happened in the battle, and you read off the situations as it gets worse. Then you have a chance to respond. You can use one of the benefits you got from role playing out your issues with each other to give someone a card. You can help or hinder them this way.

When this round is over, the war is over. You draw a card from a pile everyone has given to. If it's red, you lose the war. If it is black, you win. I've always won the war, and have never seen it lost. But one day I think I'll see it be lost, even if it's by my hand. You talk about an epilogue for each of your characters. Then the game is over.

It's such a powerful game filled with really poignant characters moments that it's hard not to walk away wanting more of those characters. They become such full, deep characters in that time. You have these snippets of history that have been framed around really deep and often intense questions so that this character you've made over the session has a flawed, fascinating personality.

If you ever want a great way to tell a really intimate, intense story, Before the Storm has your back. It's deep, dynamic, and compelling every step of the way. It has all the tools to also make a character you may play in a campaign later. The world you create is always slightly different but the same, and every time I've played there's been different religions, values, and beliefs in the group that have made it a really great experience. 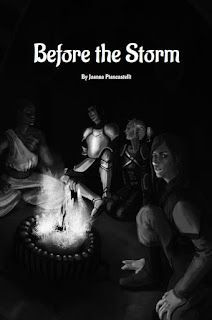 Before the Storm
Price: $30
Players: 4 - 6
GM Work: Gmless, although the facilitator must read and print the sheets
Materials: Character sheets, world sheet, playing cards
Feel: Epic, grim fantasy
Rating: 5/5 - it delivers all it promises and more