May 22, 2017
Qeteb unleashes baby illithids that pour out of the unknown and attach themselves to the man. He shrieks in horror as he dies slowly, his mind devoured by the tiny squishy creatures. After they finish, they disappear. Qeteb looks back as her companions finish killing the last of the assassins. Around us are several corpses, all belonging to enemies we felled to ensure they didn't inform our enemy of our arrival. The synad smiles at her friend, T'or, and laughs as they joke about how easy the assassins were to kill.

The game disrupts the scene as the DM hands one of the players the loot sheet. In game, I assume this looks like the group of us start rifling through the bodies, looking at what they have, how much money they have, and keeping what we want. I'm confident it's how I got some fancy dice and interesting bits of art. In fact, we've been doing this so long that we have an vineyard estate where we keep our favourite bits of treasure. 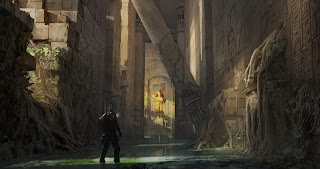 And yet, when I began to ask people about how they felt about looting the dead, desecrating tombs, and stealing personal items from dead people, there was a general "I would never!" except from those playing more traditional games. The culture of trad games, where you regularly desecrate tombs, the holy sites of other people, and raid them for goods, is perfectly normal. And while I think in real life I would never kill someone, and then go through all their personal stuff, it didn't strike me as weird in game.

But it kind of is, isn't it? This world where it's normal to just kill a bunch of people, or murder, if you will. And then go through their bodies, looking at all the things they have on them, and deciding what we like. It goes against almost all of our cultural knowledge of how to treat the dead. So much so that it's against the law in many places and in many militaries. We are not supposed to disrespect the dead. We are not supposed to loot them. Looting the dead is generally done by bad guys and the impoverished during times of crisis. And yet, it's a normal part of the economy in many adventuring games.

Fate of the Norns has some pretty strict ideas around that. You don't desecrate the dead or steal their shit. But otherwise, I haven't seen many other games really tackle what you're doing, culturally, when you are coming in, raiding their tombs, killing their people, and looting their dead. You're just adventuring. Y'know. You're just succeeding when you steal stuff from the dead. It's so normal that when I asked people about it, many of them responded that they do so with excitement. Others said that they generally didn't because it's gross.

From what I could find out via research, it's generally not all that accepted in real life. Soldiers are expected to destroy weapons, or replace their own broken ones, by what they find on the dead. And they're to take ammo. But to go through their personal belongings and take some is considered taboo and in poor taste. Some of the biggest examples of those who would loot the bodies for personal effects were conquerors and colonials. The Romans, to those they enslaved and conquered, the Nazis, the Soviets, Colonials. 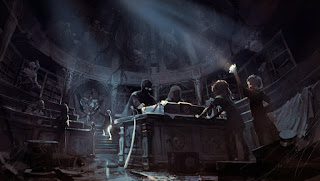 Colonialism is a constant theme in a lot of our adventuring games. As the inheritors of the colonial legacy, whether as those who have benefitted from it or as those who continue to suffer from it, our stories are filled with the dominant narrative that colonial behaviour is normal. Our games are beginning to make space and have made space for stories outside of this narrative, and that's amazing. But it needs to be noted that our trad games, our oldest games, are rooted in the colonial story that we continue to live with.

In a colonial mindset, it is perfectly normal to strap on your hat, grab your sabre, and go out adventuring in other places. It's normal to invade the sacred places of other cultures, to raid their burial grounds, to take from their dead, and to kill them if they stand in our way. It's also normal to paint other cultures as mystical and barbaric. It's normal to colour conquering as celebratory, as a victory, as a way of making money, and a way of recreating the world in our image.

Adventure gaming has gotten to the point where we've coined the term "Murder Hobo" about homeless people who walk around killing and looting. It's so common and normal that we laugh at the term and continue on our murder spree. We hear about skeletons in tombs and we run in, killing the undead, looting the dead, and desecrating sacred sites. Burial and death rites are almost universal across our planet as a way of honouring our dead and our fallen.

But since our adventurers are going into the tombs of other people, it's not really desecrating the dead, right? We're liberating important cultural pieces. We're gaining personal wealth so we can do better. We can absolutely put on the bags we like to keep on our heads and ignore the kind of narrative that we're playing with, but we do hold some responsibility for the continuation and non-examination of colonial narratives.

When we, as adventurers, enter a tomb and destroy it searching for treasure, we are emulating the same colonial behaviour that desecrated the holy sites and burial grounds of those the colonial conquerors destroyed. There's a reason it's so heavily ingrained in our literature and following suit, our gaming. And while people say it's important to have fun in gaming, a thought I struggle with constantly, isn't there a way to have fun without embracing and reinforcing shitty culture? Can't we have fun without promoting and normalizing and furthering a colonial narrative?

Why do we need to break that narrative down? Because it's an oppressive narrative. It's a narrative that continues to talk about what colonialism did to people, by eradicating culture, promoting slavery, murdering people, and destroying peoples' ways of life, as good and normal. It removes a chance to fight against that narrative by making it such a dominant and accepted truth that those who suffered and continue to suffer at the hands of colonialism aren't unable to speak without being silenced or harmed.

Adventurers can be people who are experiencing the world, saving their own world, or exploring who they are through the coming of age story without needing to desecrate the dead and tombs. They can be people who defy colonialism and who create new narratives that don't include the destruction of history and culture. We can also break down those tropes and have them have consequence. We can show adventurers that what they're doing is pretty abhorrent and how it's abusive. Some people do this by having magic spells attached to items, or by having the cultures ask for the items back and shame the people.

I'm always a fan of having things have consequence. We need to stop and examine our behaviour when we've created a genre of gaming that promotes the looting of the dead as part of the normal way to become rich and get ahead and gain equipment. We need to take a hard look at how we package and sell adventuring and what that means to us as a community and subculture. Let's try to ensure those impacted by colonialism have a space in our stories too. Let's make sure we tell their stories and have games set in cultures that aren't just the conquerors, the victors, or the colonials.

Next time you go to loot the dead, ask yourself why. Ask yourself what it would mean to the culture you're looting and why you think this is acceptable. Challenge you fellow players with questions and ideas and thoughts. This weird story trope of looting the dead and desecrating tombs and holy sites needs to go into the garbage. We need to step up and dismantle our colonial narratives and start showing what these actions mean. Having those cultures, in game, that we're looting demonstrate how horrible that narrative is, is probably the best tool I've seen used. It really drives home that perhaps we're not heroes, we're just conquerors.

While consequences like bad spells and curses are the more common consequence, that tends to make cringe. Not only are we now taking their shit, but we're attaching a mysticism to their burial grounds. It plays really heavily into the curse of the old Egyptian tombs, where white people came in and stole historical pieces from another culture regardless of how that culture felt. Sure, we painted it up by saying it was for historical integrity, but let's call a spade a spade here, it was gross. Magical items being stolen from tombs has been an age-old fantasy tradition. No one seems to have stopped and asked what culture that tomb belongs to and how they feel about it.

Magical consequences may seem normal in a world that bleeds magic at every turn. But does it drive home that what they're doing is wrong? It tends to drive home that tombs are dangerous and mysterious places and you're taking a risk when you raid them. Now if the people who are being impacted by what you do come by and ask for it back because it's rightfully theirs, and belongs to their people. Or if they just ask you to put it back, would you? If they asked for the armour you were now wearing because it belonged to their grandfather, would you give it back? And if you wouldn't, what does that say about you and your priorities? What does it say about our priorities in general that we value the loot above the sacred places of different cultures? Above respecting our dead? Above our own culture of respecting our death rituals?

I'm not saying don't have fun. Always have fun if fun is your jam. I am saying perhaps we can find ways to have fun that don't promote the colonial narrative that has become so normal in our gaming culture. Let's break it down, pull it apart, and start some new narratives in our culture. Let's be incredibly vulnerable and admit we were the bad guys historically. And that maybe, just maybe, our adventurers are also being bad guys, as we emulate and reproduce the behaviours of our culture.

Let's end the colonial narrative with vulnerability, accountability, and a willingness to question our own culture. And let's move forward with love, respect for those we've harmed, and by changing how we write and play our games.


Own our shit. Then do better.