Emotionally Charged: Adding Some Feels to Your Play 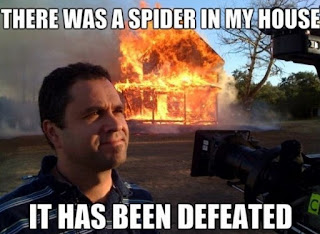 The easy solution to every problem in an RPG is to kill it with fire. Or swords. Or guns. Or hell, rocket launchers if you're into a Resident Evil style game. Regardless of your personal weapon choice, the fact of the matter remains: we default to physical action as consequence or conclusion. We take tiny steps and there the conclusion of physical action lies. Now, if you're playing a game, it's pretty likely that your course of action will draw blood of some kind.

When did violence become so casual to us gamers? When those dice hit the table and they roll up snake eyes or the dreaded critical fail one, we turn our anxious gaze to our GM and fear but anticipate their next move. You know it's gonna be real bad. You fucked up real good, son. Something is about to hurt. And you want it. Like a submissive who can't quite get enough punishment, we pony up to the table and ask our GM to make our lives hard.

The GM will smile. Maybe smirk. There's probably something in their head as a direct consequence. Now, if your GM says something like "You drop your weapon" or "The orc hits you, take *roll dice* 7 points of damage" or "the vampire bites you, take a wound" or "the dragon breathes its fire all over your fucking face" or "you hear the snarling of creatures in the dark and eyes begin to illuminate around you" then you're probably not all that surprised. You may even be annoyed because now you have to waste a round picking up your stupid sword and someone's gonna get an attack of opportunity on you.

Those consequences are traditional, boring, and violent. Some of them, granted, are necessary and follow the logical progression of fiction. But a lot of hard moves aka consequences of a failed roll are focusing on actionability on a physical level. GMs are told that what they say must be things that are actionable, things the players can take action on. Most of the time, violence is pretty fucking actionable. Someone hits you, you hit them, repeat. Someone dies. Victory party. Repeat. 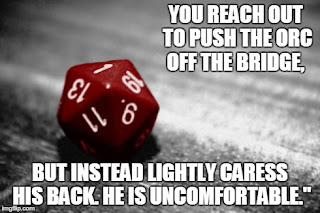 But what if we challenge that narrative for a minute?

I don't want to say that violence isn't interesting. It totally is. To me, the interesting part of violence is how it makes us feel. And yet, more often than not, I see people pass up the emotional feedback of violence around them (at least in gaming) and go straight for the physical. I see GMs ignore emotional choices and go for physical things that lack complexity but are immediately actionable.

And yet, so many people keep asking me how to add or facilitate emotional play. So much so that it's become a thing I'm doing almost daily. How I became a random expert on emotional play is a baffling mystery to me, (and true story: I'm not an expert) but it is a question I usually have an answer of some kind to. When I spoke on The Gauntlet about facilitating emotional play, a lot of great conversation happened. Still, I knew there was more in my head I wanted to push out.

It was the topic of consequences. Consequences in games are the perfect time to talk about emotional play. So many times have I played a PbtA game and the response from the GM has been non-emotional. Let me give an example. Because I feel like examples are great for this sort of thing.

I was running Monsterhearts. The fae wanted to seduce a werewolf so he wouldn't get in trouble with her. So he rolls, and despite being a hot as fuck fae, rolls a bad bad bad fail. The obvious answer was to get him in trouble, have the wolf shove him against a wall and do a bit of damage, because fae suck at that. Instead, I had them have sex and decided then and there that werewolves mate for life, like real wolves. That was the hard move. An emotionally impactful hard move that would continue to be a thread.

Had I chosen to just beat up the little fae lover, he would've taken some harm, but really, not much would've come of it. He'd be afraid of the wolf, probably avoid her, but play would pretty much continue on. Instead, I tried to see how I could make the outcome of the move emotional for him. How would the fae feel when someone fell in love with him and wanted to be with him forever, would get hurt protecting him, and would try to be there for him without being a stalker?

That small choice, that moment of choosing the emotional over the physical, gives you and your players a chance to explore more emotional play. You can change the flow of narration by making your decisions emotion based. Ask yourself how will it impact your characters on an emotional level, and hell, after something happens, pause and ask them "How are you feeling now that this werewolf has chosen to be with you forever?"

Remember that asking questions like crazy brings your players food for thought. If you add to the narrative questions about their feelings, they may sit with it for a minute to suss that out, but they then may also start thinking about using it to guide their response. And when you start adding emotional consequences, play can shift from a game that focuses a lot on the actions of violence and abuse and more on how those things impact your characters.

There have been several games I've been playing lately that have focused on how characters feel, and using emotional consequences. So when my vampire attacked a guy, she didn't mean to kill him but totally did. The consequence? That a friend of mine saw and knew I was a monster. The dead guy wasn't important. That someone I cared about was afraid of me was a consequence. It was an emotional consequence that still dramatically impacted the story, and also made my next set of actions something other than more fighting and violence. It made me pull back and try to assure them, despite their terror, that I wasn't a monster. Even though I was.

In all fairness, sometimes those emotional consequences may take a second to think about. They're more subtle than the over the top responses of aggression and anger. They impact the story in more meaningful but often less theatrical ways. If you're game is about badass fighting, then throwing in emotional consequences all the time won't do much. It'll make people annoyed that the action isn't continuing. But if you sprinkle them in here and there, it adds some great layers to an otherwise action packed game.

How do you think of emotional consequences? For me, I try to imagine how the people seeing the violence or horror or whatever would feel. How would I feel if the person I loved just hurt someone? How does violence make me feel? How does witnessing tragedy make me feel? It's easy for me because I have way too much empathy, but in general, I try to let those conclusions come out. If you say something mean or hurtful, the person you hurt will be hurt. They'll be disinterested in helping you. They won't want you in their lives.

I also try to make sure that if the PCs are abusive, that people eventually tell them they are. I want them to feel it when someone they trust distances themselves and when called on it goes: "I'm afraid of you. You scare me. You hurt people." When my one PC was told she was abusive, my heart hurt. I liked my PC, I thought she was a good guy, and she was. Except she was also a bad person. And I had to come to grips with that and see how I could make her realize her own abusive patterns.

Emotional consequences are a part of the real world. We struggle with them daily and they had depth and meaning to our lives. Adding them to your games is a way to ensure that the world feels real, what the heroes do matters, and that they aren't impervious to emotional hurt. It will amp up your play and increase the stakes when they roll. How people see them, interact with them, and trust them should impact them. Make sure their actions have physical, mental, and emotional consequences.

These aren't all the things you can do to improve your emotional experience at the table. This is just something that I'd like to see more of and something I'm implementing more and more into my own GMing. There are a tonne of other things you can do too, but this is one of the easiest and fastest steps you can take to immediately up the emotional risks your players and you take at the table. Make them vulnerable. Make your NPCs vulnerable. And make their emotions matter. Make it have consequence. Bring emotion and life to your games. 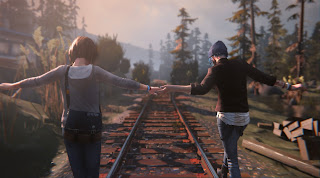 You can do it. I believe in you.