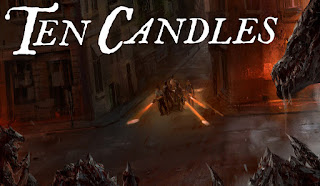 I thoroughly love tragic horror. My favourite movies are the ones where it ends and you just feel depressed but fuck was it a good movie. Like, The Mist? I mean, sure, you and I probably don't have the same tastes in movies, but that moment when the military rolls through and you're desperately wanting to scream 'FUCK YOU' at the screen because fuck man, that's dark? I live for those moments. I like the sadness and the impotence that follows, a helplessness you can't quite shake and it leaves you feeling a little vulnerable. Because let's face it, happy endings aren't realistic, common, or going to happen to us. We're always alone in the dark. No one gets out alive.

When I sat down at Stephen Dewey's table at Jiffycon, I was tired, a little grumpy, and really hungry. We had drove ten hours to sleep in a hotel for a few hours and then haul our asses over to this random campus in the middle of no where in the United States (which inherently feels unsafe, FYI, in case you're from there and haven't felt the constant tightness in your chest that the rest of us feel), sign up for a couple games, and then hang out at a social gathering post con. Needless to say, I was tired. Rach had totally talked to me about Ten Candles for a couple months at that point, and I hadn't had a chance to play. 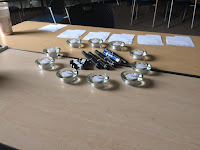 We sat down to a bunch of candles around a pool of black and white dice, a few index cards, and creepy atmospheric music. Luckily, we were playing with game creator, Stephen Dewey. I love playing games with the creator, if only because you really get to see what they had in mind when they wrote the game. Whether that comes across in a book is another thing, but I will happily say Stephen runs his game just like how the book tells you to, and that comes across clear in the game book.

Ten Candles is a game about tragic horror. You play a group of survivors trying to survive a little longer. Ultimately, you will fail. This is not a hidden fact, you know this going in. What you're doing is creating the story of their struggle, discovering who they are as people, and trying to find moments of hope in the darkness.

This is a game I find does well with fewer players. I would recommend 3 - 4 players, no more than that, in order to fully explore each character. To begin with, you create virtues and vices for each other. I ended up with Hopeful and Stubborn as my mine when I played. You then write down what would give you hope, and then you write down what you've seen someone else do that shows you how awful they can be. This is cool not because you can show how shitty someone else, but because the person sitting beside the GM gets to define something awful about the things in the dark.

I guess I didn't discuss Them, did I? The base setting for Ten Candles is this cool evocative end of the world scenario where the world went dark and then They showed up. They aren't described. They are left to your imagination and the one player gets to add something about them. But we do know They're after us and we need to stay in the light, because they hate the light. This plays beautifully into the use of candles.

In case the title wasn't enough to tip you off, the game focuses on candles as a timing mechanic. If you backed the game on Kickstarter or have since picked up special dice from Stephen himself, the game uses 10 d6s of one colour and 10 candles, and a few other d6's to add hope dice, and you can get fancy black and white dice that make the game look stunning. The special dice are 10 black dice with candles on two sides, one with a lit candle and one with a smoking blown out candle. The lit candles are successes and the blown out candles are fails.

How the game functions itself is pretty neat. You begin your opening scene getting ready to travel to a hopeful location. When you want to do a thing, you roll all of the dice available to you, which in round one, is 10. Success are great. Failures are dice that go to the GM. If you don't get any successes, you fail and the scene ends. If you succeed, you do the thing and you keep going but now with less dice. Your pool depletes as people roll and more failures come up.

Once that initial full fail comes up though, the scene ends. A candle is blown out. Only nine more scenes until you all die. The room gets darker. You now each state a truth about the world until the last candle remains. Truths are great because they let you change things and move forward in the fiction. You can be like "We make it to the house!" or "We find a weapon cache!" or something horrible but awesome like "Someone starts acting feral." The last truth is always: "The world is dark. And we are all alive."

Now, say you roll a lot of fails and a couple successes. But it's a lot of fails. You can then have a moment where you exemplify your trait, like my Hopeful or Stubborn, and you can burn it (literally if you're using real fire) to reroll the fails. This may not save you, or it might. It's definitely a cool part of the game as we see our characters burning themselves out. There are a few other mechanics, like hope dice that you get from fulfilling your moment of hope, and martyrdom, which lets you sacrifice yourself.

The game is really simple, gimmicky in the best way possible, and elegant for a tragic horror game. As each candle burns out between scenes, tension rises, which is a fun way of creating that atmosphere. I do strongly believe that any horror game needs a tension mechanic, and if the tension mechanic fails, then often the game lacks that keening desperation that it's trying to invoke. Ten Candles does that in spades. As you progress, everything gets darker. People get tense. It's great.

To top off this awesome mechanic, there's this additional thing you do at the beginning of end of game that holds zero bearing on the mechanics itself. It's just for flare. It's awesome though. So at the beginning of the game, you get every character to record a message to anyone who could find the recording. Think, like, Rick in the Walking Dead leaving that message for the dude and his kid. You record your message. Everyone does. And then the game progresses, you all die horrifically in the last round, and the last candle goes out. But then! But then... your GM pulls out the recording and you listen to those last words again. It's fucking brutal. Bam. Right in the feels. So good. 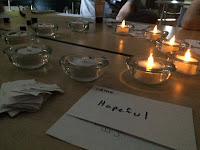 Ten Candles is a concise little game. It's a typical indie game for its size and price point. The art on the front is fun, the game reads beautifully and plays amazingly. It hooks you in and it makes you wanna do it more. This is probably the most successful gimmicky game I've played. Most of the time I find those kinds of things cheesy, but this invoked such strong themes that I immediately bought the game and wanted more. I ran it shortly after for some friends leaving town. Nothing says love you quite like killing everyone.

Now all that being said, Ten Candles is a hard game to come by. It's not available in stores and the only place I actually know where to buy the game is from the creator himself. Which means this game has an accessibility issue, as not everyone can order things online. Additionally, all the art in the game, save the front cover, is of dudes. All of it. This is because all the art inside was paid for by reward tiers in the Kickstarter itself, which were all purchased by dudes (become a character tier). Fortunately, the creator knows that's bad, and has had that great talk with me when I pointed it out, but there's not much he can do about it now.

The low light atmosphere of the game does also play against those of us with failing or failed vision. I don't think there's a way around that, other than to play in a slightly better lit space, but that also kinda takes away from the punch of the game. This isn't necessarily the game's fault, but it is an issue I've run into as a player.

Within the book, there are no instructions or suggestions for how to keep the game safe. There is no X-Card, no lines/veils, no implication that the game can be potentially triggering. While I played mine with an X-card, and when I played with the creator, he used lines/veils, I do feel a horror game should probably set up some parameters on safe play, such as how The Hour Between Dog and Wolf did. Even if no one needs it, it does set up the game to have the conversation.

The setting that it provides does awesome things. As long as you're playing on a story about darkness and light, about that core fear we all possess, then I think the game would still hold the thematic elements well. You can, of course, change the story as you please. I've only run it using the story about them coming. There are some additional stories you can follow in the back to give you some ideas, but I ran it with just the intro about them and had no problem improving. So basically there's no real necessary prep as you'll read out that bit about what's happening aloud to the players anyways. 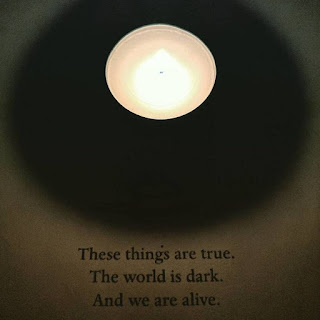 Ten Candles
Price: Softcover $28, PDF $10, Print/PDF $35
Players: ~4
GM Work: Minimal. Bring your phone to record the messages.
Materials: 10 one colour d6s, 5-6 other colour d6s, 10 tealights, index cards, phone, markers
Feel: Tragic horror, as in, no one gets out alive. Think of the Mist. But with more dead people.
Rating: 4/5 - It's highly evocative, but I would give it higher if it were easier to buy and made an effort to be safe and inclusive.