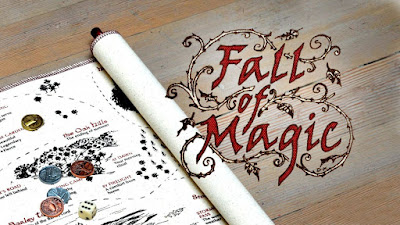 Magic is dying, and the Magus is dying with it.
We travel together to the realm of Umbra where Magic was born.

When our regular games finished, and Fan Expo was just around the corner, which meant limited our ability to play high-prep games, Rob, Rach, and I decided to try out some of the no prep games we had picked up at Jiffycon in the summer. When we were there, we stopped at Modern Myths, a gaming store of epic proportions. It was there we discovered a copy of Fall of Magic, which had been Rach's goal purchase for the trip.

Coming in with hefty price tag, Fall of Magic is the one extremely expensive game that I would say is worth every penny. It's absolutely stunning in every possible way. When you open the slender, beautifully designed box, you discover a scroll. The scroll has a map upon both sides, one side for the surface world, the other for if you travel underground. There are five elegantly made tokens, an instruction book with flawless instructions, and a die. Additionally, there are island cards for when you travel to the islands. Ross Cowman has thought of everything. The art by Doug Keith is astounding.

Fall of Magic begins by reading out a few paragraphs from the book which detail how to play safely, gently, and thoughtfully with each other. It is not a game that minces word or requires length to make you understand. You read these paragraphs out loud and then you unravel your scroll to the beginning. The scroll is not to be unraveled until you are traveling forward, so you only see where you are currently. 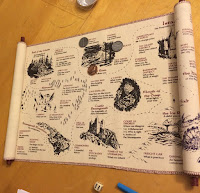 From the list on the side, you choose a title and location and name. I chose Harp the swineherd from Barleytown. Rob chose Fawn the ranger of Mistwood, and Rach choose Caspian the Fugitive of Stormguard. We selected our pronouns, and that's it. All I went into the game knowing about my character was her gender, her home location, her role in society, and her name. Then I selected a token, in my case, the candle, and we unraveled the map to the first location, Ravenhall.

The game plays like how I would imagine a good game of playing a Lord of the Rings story would play. You are journeying with Magus to Umbra, where magic was born. It doesn't say why you are. The only prompt you get is that Magic is dying. I interpreted this to mean "magic was dying we should go save it!" but that was my interpretation and not everyone's. As you travel, you go through locations and place your token, on your turn, on a prompt. These prompts will allow you to frame a scene, often a flashback, and describe a scene that answers the prompt.

My first prompt was "The last time you saw real magic" and the location was "the Menagerie." I described how Harp had saw real magic the last time when she was quite young and coming to Ravenhall to sell some of the pigs. She wandered into the menagerie and a storm was brewing. It was a powerful storm, powerful enough to kill all the great birds that were in the menagerie. They were squawking and making a terrible racket. They were afraid to die. Then the Magus appeared, moved his hand, and they were calm. 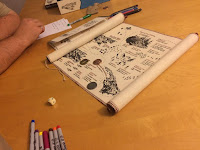 I had made several declarations in that scene. I had decided the Magus was a man, who was brown skinned and gentle looking, rounded and sweet. I declared he had calmed animals who knew they were going to die but I never said he saved them. And I had said it was the first time Harp was meeting the Magus.

Throughout your scenes, other players listen intently and ask questions. This is probably one of the best parts of Fall of Magic. It assumes you're not planning ahead. Our first session was infective. I wanted more, we all wanted more, immediately. Our second session, however, Rob and I found ourselves both not listening actively and trying to plan ahead too much. It made the game much less fun and we were much less involved with asking questions. We remedied this on the next session.

As we continued play, the questions and prompts began to form our characters. We knew the Elfar, Fawn's people, were dying. They were ambiguous in terms of gender. We discovered that Caspian had a legendary coat with multiple pockets that she took off of the body of Torbor, a warlord mage she had assassinated. We also found out Torbor was the father of Harp's child, and the Magus was Harp's father. 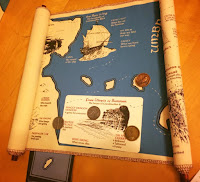 I've never discovered a character like I have in Fall of Magic. Nor have I ever really enjoyed a fantasy game as much as I did here. It was elegant, innovative, quiet, and lovely. It felt like reading a really good fantasy novel, where you're seeing a journey but also finding out about the characters as you go, and their intertwining stories with the world. There's such elegance to the game that you can't help but be drawn into the world that you create together.

As you get further in the map, you get an option to go underground or go across the sea. We chose the sea. We got in Grandmother Black's ship and wandered through three islands. For this part, there are cards you can draw from to get a different island each time. Our last island was Utopia, where we met Harp's grandmother, the Magus' mother. There was also a fluffy dragon. It was a last moment of reprieve from the darkness that had followed us before we would go into Crowhall, the last stop before Umbra.

We had built a world that was crumbling around us, where magic truly was dying, and our characters were becoming drawn and exhausted. There was a breakdown in relationships, friendships, and communication as what they wanted was revealed to be different from each other's wants. The relationships were intimate and vague. You discovered more about your relationships through sporadic conversations and scenes together after reflection. You didn't get to make what you were before hand. 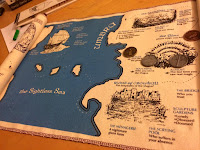 There's not much of a system to talk about. It's definitely a story game and definitely work the $100 price tag it came with. I've recommended it to random people and to good friends and there are several copies now floating around in the Toronto gaming scene. Normally I wouldn't buy a copy of a game that expensive that Rob and Rach already have, but I know I want to play this over and over again. I want to see the caves. I want to play a Raven of Ravenhall. Or a crab-singer.

Our story felt complete. The game was five sessions long. It was pretty much a prefect game that didn't take a lot out of you emotionally or mentally. You could just show up and play. The first prompt was sometimes rough because you were falling back into the world, but it was a gentle fall and easy to pick up once you were back in the right frame of mind. When we finished, I felt like I had read a really good fantasy novel that I wanted to recommend to my friends and read again in a year or so. It was so good. It was perfect.

If you don't have the cash to toss at the beautiful scroll edition of the game, there are PDF versions you can print out. Which is amazing and accessible. Rob's copy of the game was missing the back side of the game. Ross Cowman, the game creator, took the product back, silk screened the back, and sent it back to Rob. He was amazing to deal with and deserves a big hug for the effort put in.

I can't recommend this game enough. If you're not used to story based games, try this out. It's low key and easy to get into. If you're into fantasy games, you need to play this. If you're into story games, this'll be the lovely warm embrace of a summer breeze. It has versatility and can be as dark or as gentle as you want it to. Except maybe when a nightmare is given flesh. That part is less gentle. 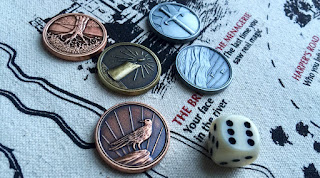 Fall of Magic
Price: $100 for the scroll edition, $15 for the digital
Players: 2 - 4
GM Work: Gmless! Win!
Materials: Print outs if you're not using the scroll. Some scratch paper for characters if you're using the scroll.
Feel: Epic fantasy journey, Lord of the Rings, Flight of Dragons
Rating: Perfect. Gimme more, Ross Cowman. Give. Me. More. 5/5 stars. Plus an extra star for how fucking pretty this is.