When is it your war?

Your hero is terrified of these reports. These are your kingdom's most vulnerable people. Except, in your kingdom, they're not. Because your kingdom doesn't have racism or sexism or queerphobia, right? You're a good person and so your world doesn't have these issues. But these issues are starting to creep into this kingdom of yours. It's starting at the edge, working its way in faster.

If your answer is you gather your army and go slay the fucking monsters, that's great. It's good to recognize that monsters are the baddies. But what if you got there and the monster was another straight white guy whom you've gone adventuring with a few times.


Now what do you do? There are a lot of fabulous game designers out there who are fighting in a war a lot of players and other game designers can't see. They don't feel it, they don't see it, they don't hear it. So to them, it's not real. I mean, I'm going to assume best intentions here and say that they don't understand it's happening. It's harder for me to accept that people know there's a war and they're saying nothing.

But let's say the average joe doesn't know. He's the guy at the table, when you talk about what it's like to be Other (non-white non-cis non-male) that he looks baffled and goes "What? No! No... that doesn't happen." His intention is good. But his blinders are on because he sees the world through his lens. And his lens says this isn't a problem.


The question I'm posing is: When is it his problem?

Realistically, the answer is never. It will never be his war because he will always look like the oppressor and therefore will always benefit from what he looks like. He could continue on in his gaming experience and possibly only feel marginalized when someone with less privilege than him tells him what he's doing is wrong. Then he may feel censored. Then he may feel oppressed, even if it isn't oppression. But the answer should be it:

It always has been his war.

One day, he'll meet someone who talks about their experiences and the problems. He might read an article on what's going on with gender parity in the gaming community or stumble across that black gay sex picture from 7th sea. He may hear his friend, partner, or acquaintance talk about their marginalizing experiences. Hey may say something that he doesn't see as offensive and then get called on it without realizing what he's done wrong. Either way, the fact remains: the most common way for him to get involved in this war is for something to happen to someone he correlates emotion to. The articles won't move him. His friend talking about being harassed for her skin colour will though. He will only feel like it is his war when somehow it relates to him.

Then he will take up the banner. Then he will listen to the stories with new eyes. Then he will see it more and more and everywhere. His fun will, in part, be ruined. His eyes will be opened. He will ask relentless questions of those who have been trying to reach him for years, or suffered in silence for years because of being invalidated at some point or another. He will ask all those already doing the emotional labour of the war to do more emotional labour so that he can understand.

Soon he will begin to investigate what is problematic. He will see the enemy, truly, for the first time: Himself. The people who are the enemy look just like him. In fact, he's pretty sure on at least one occasion he did something wrong. He's been the enemy. This is an incredibly uncomfortable realization for him. How could he, a good, decent guy, really look like them? Time will pass and he will embrace and understand that straight white male nerd culture has defined nerd culture for so long that anything that isn't that, is often met with resistance and hate.

I'm hoping you are one of these people or you know these people. These are people trying to do the right thing but struggling with a world they've never experienced. But they've done what I've been hoping they do. They've said "This is my war too."


Why wasn't it your war to begin with?

All the wars going on in gaming culture, those battles of inclusivity where we strive, as a community, to have safe spaces, to have people of colour and queer people and different genders all be included openly in our hobby without fear of abuse. Doesn't everyone deserve to have representation in a community that promotes fantasy and living out personal stories where you often play the heroes? Doesn't everyone deserve a seat at the gaming table?

If, in your core fundamental beliefs, you value things like freedom and safety, then you must believe that everyone deserves a seat at the table. That everyone's identity and presentation should be valued and unique perspectives are a necessity for communal growth. If you believe this, then it's always been your war, you just refused to take up arms until it impacted you.

This has always been your war. Even if you're only picking up a weapon now.

Your role? Figure out how you are contributing to this problem. If you're a game designer, get some art and characters and examples that don't just feature straight white men. If you're a GM, include a rich world and NPCs who aren't just ethnic stereotypes. If you're a player, challenge yourself to ask for more diverse settings and casts. Everyone needs to talk about the problematic content of what they're playing. Most importantly, it's your job to be a voice when shit is going down. Speak out against the enemy. Speak out against the people who look just like you.

Don't let the enemy silence people. If you can, create a space for the voices that aren't being heard. Facilitate others speaking out. Don't speak for those entrenched in the war. Find your own voice. Don't speak as though you're the victim. Don't take the experiences of those impacted and use it instead of letting them speak. Be present. But don't make it about you. It isn't about you. It's about the system that benefits you. Tear that shit down. Tear it down and burn it.

It's always been your war.
Choose your weapon.
Fight back. 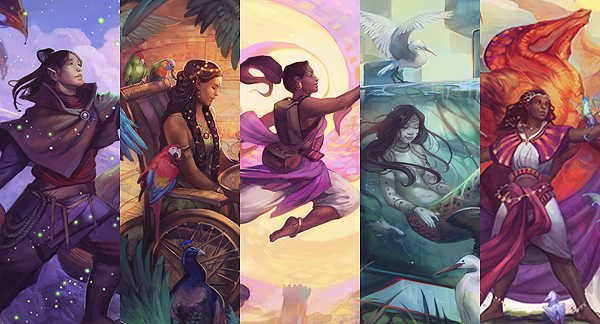