May 30, 2016
This past couple weeks I've had about three white dudes (all good people) come up and ask me to look at their game they're designing or talk about their game they're designing with me. All three of them were Victorian/Steampunk. Steampunk is a fun genre, to me. I mean, I had a Steampunk wedding and I love the aesthetic of it, because who doesn't want to wear a corset? 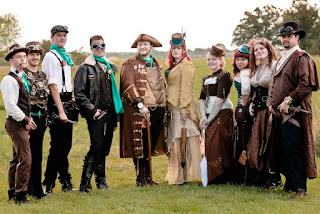 But aesthetics aside, Steampunk offers a time of exploration. The Victorian era is often called the Age of Wonder, because of the way anyone could be a scientist or an explorer and there were adventures to be had. It's a time when they believed in Aether and the potential energy source and power it could provide. It's a time when the world was rapidly expanding and becoming bigger with each passing moment. It's at time when cultures were meeting new cultures, new foods and religions and spices and aesthetics were being discovered. It's a time when mass production allowed anyone to have writing utensils, so communication was opened up to the masses. While Airship Pirates does tend to touch on this a little, at least the classism part, and definitely the "othering" part of looking different, most Steampunk games do not tackle any of these issues. They do the good old fashioned whitewash where we don't talk about the problems of the setting or genre and just enjoy the good parts of it. As a woman and a person who identifies as queer, most settings, especially historical ones, make me grimace when we don't at least discuss the issues present.


Imagine having the privilege to ignore issues because they don't impact you. If you're able to play a setting where someone doesn't ask you to justify your choice of being a white straight male, then you have that privilege. When you sit down at a table and you're going to play a person of colour, a queer person, a person whose gender isn't cis male, or a differently abled person in a game, and people immediately ask "well, how are you x if you're y?" then the question of privilege is coming in. Because it means we're othering people in game and out.

That aside, I really want to mostly talk about how evident it is, in game design, that a good chunk of the gaming community doesn't seem to be aware of their privilege. Steampunk is an easy setting to pick on because it is so rife with problems and so popular that you can't help but tear holes in the white male fantasy that comes with it. Recently 7th Sea by John Wick did an amazing kickstarter that was the first game to hit over a million dollars in backing. The company released a preview recently and had black characters and gay characters and... wait for it... gay black characters. Here's what the internet had to say: "John Wick puts a minority that has no business being in Europe" "John Wick took out dueling and ship-to-ship battles—the two best things about the game out—and put in a gay sex scene. Zero stars." "John Wick puts a black gay sex scene in the book. Way to pander to the SJWs, John Wick!"

So John Wick, who appears to be aware of his privilege, or at least has people on his team who *get it* has put in stuff that immediately challenges the perception of pirates. If you check out the writers on this project on the kickstarter page, it's pretty fucking epic. Go preorder this book now. Pirates, often seen as manly men who rape and pillage and take what they want and don't obey the rules... people who are, at their core, essentially choosing to be other because the rules are so restrictive in society... can't be black or gay? Even though, realistically, where it was acceptable, or at least notable that women were pirates, a safer space for people of colour and queer people would have been with outlaws?

The male space occupied in fantasy games, and let's be honest, most pirate games that have element of fantasy to it because scurvy isn't sexy or fun, is challenged when we begin to insert things that break down the privilege of being the sole occupiers of the space. So when 7th Sea puts gay black pirates in, it says, clearly, that white men weren't the only ones here, and these gay sexy black pirates aren't here for straight white male fantasy. They're here for queer people. For people of colour. And when the women are portrayed as just that, women, and not sexual objects for male consumption, the book rounds out in a way that challenges and forces conversation about the space.

Whether the rules or book have a discussion on slavery and the problematic content of the age, I honestly can't say. I won't be reading it until I get my grubby little hands on it when it ships. But one thing I walk away from 7th Sea with is a burning question: "Why isn't this normal?"

Urban Shadows slightly challenges us to see race and racism in gaming by addressing it on its character sheets and in a few paragraphs in the book. I owe this, in part, to Mark Diaz Truman (also on the 7th Sea team), who continues to force discussion on racism as an issue that has impacted him. Much like in an upcoming game by Andrew Medeiros and Anna Kreider about the patriarchy, sexism is a focus point because of how it has impacted the authors.

We shouldn't expect authors to explore the issues that impact them. It's fabulous if they do, but the work of exploring those issues and bringing them to bear should be on those of us who are benefitting from being able to ignore the issues. White people need to own our shit and look at our games and say "Why isn't this 1920's setting talking about  segregation?" "Why isn't there anything in this pulp game about antisemitism?"

The issues are uncomfortable. Your games don't have to be about the issues. But it does need to give a nod and own that this was a troubling time. There was never a time in history when times weren't troubling. The only people who can actively ignore these troubles are the people who are historically benefitting from it. Maybe it only needs to be a few paragraphs that mention some of the shitty things going on in those years your game takes place in, or maybe it's a chapter on how to deal with sensitive content as people of privilege.

I don't have the answers. I know in the game I'm working on, which is set between 1890 - 1950, I talk about Othering, and the issues of the eras as they come, including racism, sexism, ableism, labour issues, segregation, antisemitism, and the struggles of each decade as these issues hit a head, unfolded and entrenched themselves into American culture. In a small game, I would add a paragraph about acknowledging the problematic content even if you're not providing the tools to negotiate the content. 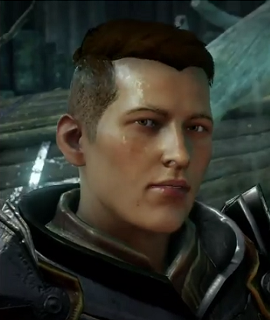 As someone playing a game, you can easily ignore problematic content. Fantasy fulfillment is definitely part of why we play games. And sometimes we just don't want to be as sad in a game as we are in real life when it comes to dealing with issues. I know as an activist, sometimes it's just nice to pick up my sword and shield fighter in the Dragon AGE game and kick some darkspawn ass. But Dragon Age is just as rife with content and problematic issues that it's showing and not telling you about. Because it acknowledges, at least the video games do, that the world is shitty and we need to talk about things and normalize other things (like that trans people are people and gay people are people and not all people are white and how slavery has long term implications as does colonialism).

But I do get the need to just play a straight up fantasy fulfillment game. There's nothing wrong with that. It doesn't give you the ability to ignore the issues of the era you're playing in though. It gives you the ability to say "Yes, Cthulhu is a racist setting and that's really awful. I would like the game to focus on mythos and investigation, and I don't really want to get into themes of racism." It means: acknowledge and talk about the level at which it functions in your game. I know as a woman, sometimes I want sexism as a theme because I want to feel like I can actually tackle the patriarchy and beat it down a little, and at other times I just don't have it in me to fight that fight and just want to stop Nyarlathotep from doing his thing. They're both okay.

As a final note on this long complicated discussion that I've only briefly touched on, I will say that I'm thrilled to see gaming begin to keep up with social issues. It brought me joy to see the internet get upset about 7th Sea. I want to see more of it. I want to see games start to own it, to break it down a little, and to open up the floor to the discussion of those topics. We have to start somewhere and we can't just keep waving our privilege flag around because it's 'fantasy'. Let's be good people. Let's do good things. And let's do it now.